WHEN POLYGAMY BECOMES A CRIME 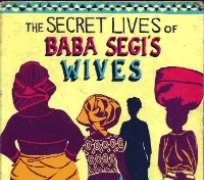 The Secret Lives of Baba Segi's Wives revolves around a family of twelve and their everyday squabbles. It is an intriguing story of a typical African Patriarch who believes in his duty to bring as many children as he desires to the world so long as he takes care of them.

After his marriage to three women, he boasts of seven children, which are proofs of his virility. In Baba Segi's world, women are responsible for infertility in marriages and because he is convinced that he has not failed in his manly duties, he goes ahead to marry a fourth wife.

Trouble however starts when his fourth wife, Bolanle, a graduate, cannot procreate after two years of their union. The constant bickering among his wives does not help matters as the first three wives conspire against Bolanle whom they see as a threat. The first three wives (Iya Segi, Iya Tope and Iya Femi) feel Bolanle is superior because of her educational status, hence their positions seriously threatened.

They always fight for their breadwinner's attention through their various tricks and antics. Meanwhile, tragedy sets in when Segi, the first born of the once happy and close-knit family dies mysteriously. Baba Segi, who is a successful man gets jittery although he believes in family values. The situation gets worsened when his fourth wife fails to give him a child.

Apparently disturbed by Bolanle's barrenness, Baba Segi seeks advice from his friend, Teacher who asks him to tread carefully with Bolanle since she is not as illiterate as his first three wives. He further advises him to take her to the hospital for tests as she has refused to visit any herbalist's cocoon.

This sounds good to Bolanle who has suffered constant verbal abuses from her once very loving husband because of her inability to give him a child. Bolanle's cold attitude towards life is also attributed to her troubled childhood. Her father had been irresponsible, turning his wife to the breadwinner of the family. Her mother on her own side had treated her and her sibling with disdain, and less affection.

After visiting the hospital, Baba Segi discovers that Bolanle rudely terminated a pregnancy when she was sixteen. This revelation further infuriates her husband who couldn't hide his disgust for her ugly past. The other wives continue to plot how to send Bolanle packing and their husband falls for their antics.

With the support of Iya Femi, Iya Segi plants a charm in Baba Segi's bedroom, claiming it is Bolanle's ploy to kill their husband. Meanwhile, Iya Tope who knows the true story identifies with Bolanle, but draws the ire of the other two wives who were determined to rid their home of the woman they see as a gold digger.

The funny side of the wives' hostility to Bolanle is that she usually disrupts sex rotation in the home. Moreover, Bolanle's story of rape robs her of all dignity she has as a young girl. Her boyfriend then had opted for an abortion, hence marrying Baba Segi offered her an escape route from her shame and debasement. Iya Femi's story too is equally pathetic. She also had a troubled childhood as her uncle sold her out to Baba Segi when her parents died in an auto crash.

After years of servitude in a household where she was abused sexually, the only escape route was her husband's house. Quick to grant her husband's innermost desire for more children, her ex-boyfriend, Tunde impregnated her before Iya Segi could show her the way to make babies in their household. Her character as a troubled woman is further re-enforced when she avenges her uncle and his wife who earlier robbed her of her inheritance.

All the rifts, drama and envy end up when Baba Segi discovers eventually that he is not the father any of his seven children. After Iya Segi's confession, Baba Segi loses faith in himself, and advises his first son, Akin against polygamy.

Bolanle too blames herself for the misfortune that befalls the household. In her view, if she had not come into that family, there would not have been rancour, Segi wouldn't have died for sins she did not commit and her husband would not have discovered that he didn't father any of his children. She concludes that her entrance into the family signals tension, and increases Baba Segi's animosity towards his first three wives.

Lola Shoneyin displays her mastery of story telling in the novel. The well articulated, suspense- filled, and grand resolution of this creative piece makes it a timeless classic. Weaving the voices of Baba Segi, his four competing wives and their children into a portrait of clamorous household of twelve, Lola captures a realistic, polygamous Nigerian family.

The novel x-rays the inherent evils in a polygamous family, the dangers it poses for the children as they are raised in an unhealthy, rancorous environment. With an episodic plot, the novel is error- free. What catches the reader's fancy is descriptive analysis the novelist employs to give each character a human face.