Still Single, Despite the Fame 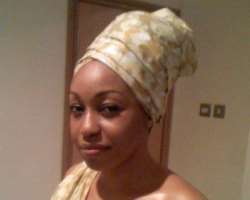 Nigeria's entertainment industry is filled with famous, handsome dudes and beautiful divas, endowed achievers who inspire and make other folks happy, but are either divorced, unhappy, unmarried or of 'unexplainable' status. Question abuzz is,'What's amiss?'

This picture raises one question,'can Rita play the guitar?' The answer is, em . . . Never mind, the theatre arts graduate of the University of Port Harcourt is one hell of an outstanding actress and is one of the few actresses who has almost no scandal to her name.

She started performing when she was a child, appearing in school plays and children's television shows in Imo, her home state. Having put up sterling performances in over 100 movies, she won the City People Award in 2004 as the Most Outstanding Actress and is regarded by many as a well cultured lady. But many have endlessly asked,"what is she waiting for?"

The England-born female rapper of Ijoya fame is one of Africa's active, female rap artistes and one of the few Nigerian women associated with AfroHip-hop. Though the media was once awash with reports that she was involved in lesbianism, the mother of one is still well respected. But she has never hinted at marriage, neither does she look like one who has batted an eye-lid at any man. Wonder . . .

Genevieve Nnaji is undoubtedly one of the most successful actresses in the industry. Though she had a daughter while in secondary school, she has never had cause to regret it, because it didn't deter her from sailing the high seas of success and fame.

In 2005, she won the African Movie Academy Award for Best Actress in a Leading Role. Genevieve began her acting career as a child actress in the then popular television soap Ripples at the age of 8 and joined Nollywood at the age of 19. She has featured in over 80 Nollywood movies and is considered one of Nollywood's highest paid actresses.

She released her debut album One Logologo Line in 2004 and has featured in several commercials , including those for Pronto beverage and Omo detergent. Also in 2004, she became the Face of Lux in Nigeria. In 2008, she launched her clothing line St. Genevieve and was appointed the official Face of MUD cosmetics in Nigeria in 2010. The highpoint of her career, so far, is her famed appearance on the Oprah Winfrey Show, where she was hailed as 'one of Africa's best'. She has also received many awards and nominations, but inspite of her attainments, the screen goddess who is still single, has continually parried questions relating to marriage and any form of romantic dalliance with anyone. . .but we don't know if she is searching.

The multi-talented computer science graduate is a successful actor but Chidi who has remained unmovable on Nigeria's Eligible Bachelors' List has raised a lot of eye-brows with his prolonged single status. Could it be that the charming 'GQ' is still single because he has not made enough for a bride price? Tufiakwa! Em, the money made frm selling those wonderful toys, nko?

She has made lots of enemies among the female folk for daring to 'bare it all' in many movies in which she has appeared, but has refused to budge, claiming to be 'a true professional'.

Beautiful and well endowed, the sexy one, like the others on this list, has been unable to 'tie' down Mr. Right.

Hailed as one of Nigeria's most talented artistes, 2Face has refused to say "I do" to one of his numerous women.

The father of many children frm different women, has at different occasions caused chaos among the women who are all fighting to have him as a husband. With all his women and children, he is still single. probably stalling about his wife of choice?

Comedienne Damilola Adekoya, popularly known as Princess is the last woman standing among the comedians. Princess is a graduate of creative arts frm the University of Lagos.

She started acting at the age of six and when she turned nine, she took part in a play entitled: Half Human, Half Animal.

Princess who dumped engineering for creative arts has featured in so many television programmes, including Flat Mates and Super Story and she is also into so many other things, while maintaining her status as a comedienne. Chick's still single, sha.

The Anambra State-born twins are making waves in the music industry. Both graduates of mass communication and business administration respectively frm the University of Abuja, they have endlessly blurnt the charts since their debut with Get Squared, an album released by their label Square record. The album dominated charts across Africa on the backs of hits like Bizzy body and Temptation.

Peter, who doubles as a guitarist and drummer, is the choreographer of all their dance routines while Paul plays the keyboard and does all the production and sequencing.

They have become Africa's biggest music act and recently won $1m as the best African act at the Kora All-African Music Awards 2010.

These talented artistes recently 'opened' their mansion in Lagos and have swelledd their coffers by plying their trade as music icons and Globacom Ambassadors. Inspite the fame they enjoy, they are still single.

The Post Graduate Diploma holder is also a script-writer. Her first script was Ordained, produced by OJ Productions.

She started acting back in secondary school and was a member of a drama group in her church, earning her a scholarship. Aside acting and scriptwriting, Uche Jombo also does a TV presentation for the NTA and interior decoration.

The Glo Ambassador seemingly has all it takes: physique, wits, charisma but... no bobo, yet.

The Koko master, D'banj was a London-based singer and song- writer with JJC and the 419 squad and they burst onto the scene with their acclaimed song Kilonshele, before he quit the group to chart his course as a solo artiste with Don Jazzy as his producer.

The all-out entertainer, known for singing about Kokolettes and long things has evidently not found out who to Fall In Love with.