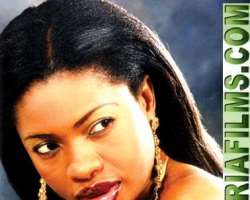 Vivian Ejike, a top Nollywood film producer, tells 'NONYE BEN-NWANKWO why she left banking and why the industry is in need of overhauling

Why did you choose to be behind the camera instead of being an actress?

So acting wasn't in your mind at all?

No. I didn't think of acting. But then, I had a deep interest about movie making and music. In fact, my parents thought I was going to be a singer. They had a deep fear about this because of that. I was supposed to go somewhere and study, but my father refused. He thought I wasn't going to come back. He felt I might become a musician if I went away.

But don't you think the actors and actresses are taking all the applause?

You will be shocked at the kind of things people who are behind the camera go through. At times, I call some actresses and ask them if this is what they go through. I am behind the camera and I try to hide my face as much as possible. The headache is much. I think I am very comfortable here. I even get more attention where I am.

How did you become a movie producer?

I think it was just what God wanted me to do. I didn't know anything about movie making. It came naturally. I used to know somebody back then, who wanted to invest his money on something. I told him to make a movie. That was the era of Living in Bondage and Taboo. He asked me how he was going to do it and I told him he shouldn't worry. I had a couple of friends who were actors. I just called them up and before you could say Jack Robinson, I was already auditioning for the cast.

You are also a script writer…

Yes. Initially, somebody was writing for me while I just produced. I give all the credit to Teco Benson; he really encouraged me. He told me I could write and I should think about it. I sat back and thought about it. Eventually, I came up with When the Heart Lies. Subsequently, I wrote Silent Scandals.

You also have a new movie?

Yes. I am going to premiere it on December 18. It is called Private Storm. I premiered it in Ghana and it was a huge success. For some reasons, Ghanaians seem to like my movies; I feel so humbled. The response for the new movie was very wonderful. I featured Omotola Jalade-Ekeinde, Ramsey Noah, Ngozi Ezeonu and Ufoma Ejenobor.

Why do you always use A-list actors in your movies? Is it because you can afford to pay them?

The moment I get on my system to write a movie, I already see the movie playing in my head. The scripts decide for me who I will cast in the movie. Even before I'm done with the script, I already know who I will use.

Do we see you doing any other thing apart from movie-making?

I don't think so. I am not good at every other thing except this. I can't do buying and selling, I am terrible at that.

But you were once a banker.

Oh yes. I did exceptionally well as a banker. I was well above all my contemporaries.

So why did you leave?

I had no job satisfaction. I was earning good money and I was doing the job well. Even when I put in my resignation, my managing director felt I had lost my mind. A lot of people called me to ask if I was alright. It is only somebody who has a passion for something that will understand how I felt that time. I got into banking because it was a family tradition of some sort. Both parents were bankers; it was expected of me to be like them.

How did they take it when you left banking?

Oh God! My father was so disappointed. I was out of the country for a while when I left banking. When I came back, my former bank wanted to lure me back, but I refused. My father talked and talked, but I stood my ground. Unfortunately for me, I even lost money when I came out with my first production. I didn't make money in my second movie either. My father was angry. He felt I was just wasting my time. But I knew what I wanted to do. I had to stay there.

Why are home movies no longer produced as frequently as before?

I think it has to do with the economic crunch. But then, I think we are having major issues in the industry. I think we need a total overhauling of the industry. We should just press the pause button and then we re-strategise before we start coming out again.

Are there things you guys are not getting right?

But you still do movies. Are you saying your own movies are not substandard?

I will say they are not. After When the Heart Lies, I took a two-year break. I didn't like what was going on in the industry. I wanted to do something that was more challenging. I wanted to do something different. I was so tired of the norm. I took my time and I came out with Silent Scandal. Of course, we all know that there is a clear difference between Silent Scandal and many other movies. From then onwards, I made up my mind that any movie I make should be better than the previous one. I am praying to God to be able to achieve that.

It was alleged you stole the idea of Silent Scandal from another producer, who used to be your

very good friend.I don't know why you want to drag me into this controversy. I wrote Silent Scandal in 2007 and the person you are talking about, wrote her movie in 2009. How is it possible that I stole her concept? Please, let's not get into that. I don't even want to talk about it.

Why is it that you and Emem Isong are no longer friends? You used to be best of friends…

To be honest with you, this is not a question. For me, I would rather talk about what I do. You are simply blowing nothing out of proportion.

But it was alleged you stole her movie.

My dear, nothing like that ever happened. You can call me anything, but never a thief. I am intelligent. I went to school on two scholarships. That goes to show you that I am not daft. I have not even released Private Storm and it is already winning awards. Silent Scandal won about 15 awards. Come on! I have been writing scripts right from when I was young! I thank God. Most people who know me in the industry know the kind of person I am.

But is there a rivalry between the two of you?

Those in my industry will tell you I have no time for such. If I am into such petty things, I would have shot like 10 movies this year. I have a mind of my own. I am not influenced by the environment I find myself. I live a peaceful life. I am a total bore. I don't look at other people. Is it possible for somebody who operates in such a manner like I do to go and compete with anybody? I don't have the time.

You have not told us why you guys quarrelled…

Tell us about growing up---

It was fine. We were lucky to have parents who could somehow cater for all our needs. They were both bankers. Growing up was fun. We did the normal mischief. I grew up in Enugu before I left for UNIPORT (University of Port Harcourt) where I read Foreign Languages.

God, please let me just have a nomination at the Oscars. That alone is okay for me.

I am married. But like I said, I don't discuss my private life. There is a thick line between my personal life and my work. I strive to keep it that way.