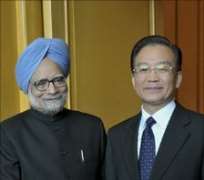 The latest of a number of world leaders to visit India, Mr Wen is accompanied by some 400 Chinese business leaders.

China is India's largest trading partner.
A joint communique signed by the two sides on Thursday said that they had agreed to expand co-operation in infrastructure, environment, information technology, telecommunications and investment and finance.

It said that both wanted “to draw on each other's strengths and pursue mutual benefit and win-win results”.

The two men discussed a number of sensitive issues, including a long-running border dispute.

The two countries signed some 50 deals in power, telecommunications, steel, wind energy, food and marine products worth $16bn at the end of a business conference attended by Mr Wen in the capital, Delhi, on Wednesday evening.

This overtakes the $10bn of agreements signed between Indian and American businesspeople during the recent visit of US President Barack Obama.

“There is enough space in the world for the development of both China and India and there are enough areas for us to co-operate,” Mr Wen told the business conference.

Massive delegation
Mr Wen – who last visited India five years ago – brings with him one of the largest teams of Chinese business leaders ever to visit India.

The Chinese delegation dwarfs the number of trade chiefs led in recent weeks to India by US President Barack Obama (215), French President Nicolas Sarkozy (more than 60) and British Prime Minister David Cameron (about 40).

The communique said that the two sides had decided to establish a “mechanism of regular exchange of visits between heads of state and government”.

“They welcomed the opening of the telephone hotline between the prime minister of India and the Chinese premier and agreed on regular consultations between the two leaders on issues of importance to both countries,” it said.

“They also agreed to establish the mechanism of annual exchange of visits between the two foreign ministers.”

Later in the week, Mr Wen will travel to India's nuclear-armed neighbour and rival, Pakistan, for a two-day official visit.

Though bilateral trade with China is booming, the relationship is not benefiting India as much as it might, say analysts.

Delhi has been demanding greater access to Chinese pharmaceutical and IT markets as it seeks to level a large trade surplus in China's favour of up to £25bn.

China's envoy to India, Zhang Yan, told reporters ahead of Mr Wen's visit: “Relations are very fragile, very easy to be damaged and very difficult to repair. Therefore they need special care in the information age.”

Ties between the two countries were tested in August when India cancelled defence exchanges after China refused a visa to a general based in Indian-administered Kashmir.