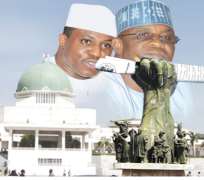 ABUJA, Dec 15, (THEWILL) - President of the Senate, Senator David Mark today announced that the National Assembly would lead the effort to cut the cost of running government.

To start with, he informed the session that members of the National Assembly would be cutting its recurrent expenditure. He however advised other arms of government to make similar sacrifice.

The Senate President however charged President Goodluck Jonathan who presented a N4.2 trillion 2011 budget to ensure full implementation adding that the heart of a good budget is an effective and efficient implementation, because poor budget implementation remains the bane of the nation's economic and social development.

However, he assured that the National Assembly is determined to raise the standard of budgetary process to a level far above the formalities of annual rituals.

"Mr. President, and as you know, the heart of a good budget is an effective and efficient implementation. Yet, poor budget implementation remains our nation's economic and social development albatross, over which we all have poured songs of lamentations.

"We, in the Legislature therefore, are determined to raise the standard of our budgetary process to a level far above the formalities of annual rituals. We must give meaning and soul to our budgets to truly be the succour to the people's economic stress and depression, to give hope and to be a soothing source of their faith in government. We owe this to the people we all represent. With a new conscientious conviction, commitment and vision, we must, and can accomplish this."Related to this, is the unacceptable disproportionate ratio of recurrent and overhead expenditure to capital expenditure. No nation desirous of meaningful development can afford such a disproportionate allocation of its financial resources between consumption and investment towards its own future development. This means that the cost of running government has been increasing at an unsustainable rate. We must all rise together and address it.

"The National Assembly in the discharge of its responsibilities, will, from the 2011 Appropriation Bill re-evaluate these budget aggregates and other major macroeconomic variables across the board for all government MDAs and other arms of government to lower the personnel and overhead expenditures, and improve the level of appropriations for capital expenditures", he said.