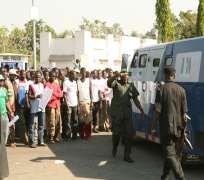 ABUJA, Dec 14, (THEWILL) - Hundreds of youths today thronged the National Assembly, Abuja protesting the amendment of the 2010 Electoral Act even as the House of Representatives hurriedly suspended debate on the controversial bill. The House had slated today to read the bill for the third time but suddenly reneged following the demonstration that preceded their plenary today.

Chairman of the House committee on Rules and Business, Hon. Ita Enang had advised his colleagues that the third reading of the bill be postponed to allow members more time to study the bill.

In calling for the suspension, Enang said, “Mr. speaker, I want to crave the indulgence of this honourable House because members just received the bill and so should be allowed to take a second look at it to enable them be better prepared for another day.” There was no dissenting voice hence the Deputy Speaker, Hon. Usman Bayero Nafada who presided over the session ruled that the debate be suspended to ‘another legislative day’.

It was however gathered that the protest may have compelled the lawmakers to take caution on the amendment. As early as 7.30 am, hundreds of youths and women carrying placards with varying inscriptions stormed the main entrance to the National Assembly protesting the planned passage of the Electoral Act Amendment describing it as ‘a rape of democracy and an invitation to anarchy”.

But the Director of SSS at the National Assembly, Abdulrahman Mohammed, and the Sergeant at arms, Col. Emeka Okere [rtd] as well as the National Assembly Divisional Police Officer [DPO] MD Shehu made spirited efforts to prevent them from gaining entrance into the parliamentary complex.

Addressing the crowd of protesters, Comrade Danjuma Bello Sarki expressed dismay over the attitude of the lawmakers who he said, tinkered with the good intentions of the 2010 Electoral Bill which sought to satisfy the yearnings and aspirations of Nigerians for credible, free and fair elections which is the bedrock of democracy.

“The National Assembly has tinkered with most of the vital ingredients that will strengthen democracy in Nigeria and has gone ahead to bring self-serving sections that have the potential to mutilate the little gains of our democratic project in the last decade.

“Section 87 [4] A of the 2010 electoral amendment act, for example has brought back the corrupt and discredited system of bringing delegates to Abuja for Presidential Convention instead of the earlier one that allows the primaries to be held in States. The same Section 87 of the electoral Act 2010 provides for all members of the National Assembly to belong to their respective parties’ National Executive Committee [NEC] which is obviously self-serving and is intended to substitute the powers of Governors with tyranny of the Legislators.

“The orders of elections were tinkered with to give undue advantage to the incumbents in the proposed amendment to the electoral act 2010. We say no to Presidential Convention in Abuja, We say no to Automatic membership of National Assembly members in political party National Executive Committee [NEC] and we say no tinkering with orders of elections”, he said.

Sarki said the group was aware of the monumental corruption going on in the country but lamented that “no one can conveniently say what was done with the billions of the foreign reserve that is dwindling by the day. Nigerian economy is in the woods as a result of reckless squander mania of the current administration and it will take great efforts to bring it back to sustainable growth.” But Chairman, House of Representatives Committee on Rules and Business, Hon. Ita Enang who came later to address the press explained that the House has not passed the Electoral Act Amendment Bill as erroneously perceived by Nigerians.

Enang also brought a copy of the Order and Proceedings of last Wednesday to show that the amendment was not passed by the House.