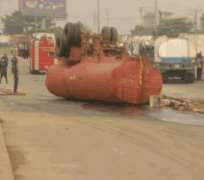 The accident which occurred at about 8.30 a.m. caused panic as the tanker destroyed many other vehicles. The tanker was said to be coming from Gbagada area enroute Airport Road. The driver of the tanker took to his heels after knocking down the undergraduate identified as Itoro Ekere.

Passersby around gave him a hot chase and arrested him. They were contemplating on how to set the driver ablaze when policemen arrived the scene and rescued him.

Daily Sun gathered that as the driver was escaping, the tanker rolled back and crushed the vehicles coming behind which led to the death of another person. About 500 people protested the killing of the graduate. The protest also caused traffic gridlock, forcing commuters to trek to their various destinations.

The Lagos State police spokesman, Mr. Frank Mba, a superintendent of police, confirmed that one person was crushed to death while four persons sustained injuries.

Mba said only four vehicles were crushed.
The police spokesman said the corpse was moved to Makinde police station. He said police are still investigating.