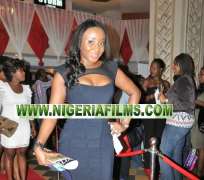 A new record has been set in movie premiering and indeed movie production in Nigeria by a self trained Canada based Nigerian director, Mr. Lonzo Nzekwe with the award winning movie 'Anchor Baby'. From the galaxy of Nollywood stars like Omoni Oboli, Stella Damasus, Rita Dominic, Ini Edo, Ifeoma Ejenobor, Uche Jombo, Joke Jacobs, Beverly Naya, OC Ukeje, Bhaira Mckiwu, Vivian Ejike to their Hollywood counterparts like Sam Sarpong, Terri Oliver that strutted the red carpet and an extensive buffet where all kind of small chops and wine were served.

Starting with a red carpet event that lasted for close to two hours, celebrities in different attires sashayed the red carpet and press men had a field day interviewing the guests.

The movie screening proper began after the red carpet and was held in the most spacious hall of the Silverbird Galleria. Guests who had waited all the while to see if the movie was worth the while were not disappointed at the end of the movie. A guest at the event said “coming all out for the premiere of this movie is really worth the while, and in my opinion, it is the best movie in 2010. The suspense, the directing, editing and cinematography of the movie proves it to be a standard movie and I see it clinching an Oscar award”.

Veteran producer and movie director Lancelot Imasuen speaking on 'Anchorbaby' at the African international film festival said 'Anchor Baby' is the best film from the Diaspora that I have seen in 2010. It has a compelling storyline and the acting was excellent.

Movie lover all around the nation are now beginning to conclude that 'Anchor Baby' is likely to be the movie with the largest cinema presence in 2010.

'Anchor Baby' will be in cinemas across the country from the 10th of December.

'Anchor Baby' tells the story of Joyce and Paul Unanga, a married illegal immigrant couple living in the US; they have been ordered by the US immigration to leave the country by voluntary departure. They agree to leave; but only after Joyce who is 5months pregnant delivers her baby inside the US. This will guarantee automatic citizenship for their child. Ignoring the deportation order, the couple goes into hiding. Paul was later caught and deported while Joyce stayed back to struggle on her own to achieve their dream.

'Anchor Baby' has won international awards like Harlem International Film Festival, the Los Angeles Cinema Festival of Hollywood U.S.A and has been officially accepted to screen at the 'Fans of Film' film festival in Albuquerque, New Mexico, USA.

'Anchor Baby' will be in cinemas across the country from the 10th of December.