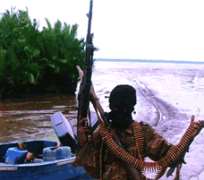 The President of the Ijaw National Congress(IYC), Miabiye Kuromiema, has called on well-meaning Nigerians to donate relief materials to victims caught in the crossfire in the attack by men of the Joint Task Force (JTF), who raided the Ayokoromor community in Delta State in its bid to fish out Gen. John Togo.

Kuromiena who made the appeal in a press statement issued yesterday in Abuja, said a visit by members of the IYC to Ayokoromor community to ascertain media reports over the alleged massacre of innocent Nigerians by operatives of the JTF revealed that nine persons lost their lives during the raid with seven of them hurriedly buried while two were deposited at the morgue.

He also said the visit revealed that over 40 houses were destroyed in the village during the attack while hundreds of villagers had been reported missing.

Kuromiena who said the IYC was not interested in apportioning blame on who was right or who was wrong, stressed that its immediate priority was to give succour to those he described as 'ordinary, innocent, harmless and supportive community people who worked hard to avoid this current ugly incident they now face through their open condemnation of the main culprit John Togo and his NDLF group and their support for the government and security authorities in the effort to track down a fleeing criminal and his band.'

The press statement jointly signed by Kuromiena, Pamotei Warisuwotie, chairman, Western Zone of IYC and Preye Okoba, secretary, Western Zone of IYC respectively and made available to Daily Sun in Abuja, said the IYC was still carrying out its investigations in the area, which it hoped to make public very soon. It also promised to make its findings known to the adviser (NSA), chief of defense staff (CDS) and chief of army staff (COAS), director of State Security Services (SSS) and commissioner of police.

The press statement reads: 'Our visit on December 3 between the hours of 1.30pm to 6.30pm a team of leaders of the Western Zone of Ijaw Youth Council lead by myself, president, Ijaw Youth Council, visited Ayokoromor community and the now defunct camp of John Togo, the leader of NDLF, who recently reneged on his commitment to amnesty programmes he initiated, subscribed to and was involved in.

'Our aim was to get an independent and objective assessment of the situation on the ground and to make our own contribution to solutions on the evolving social and security challenges. 'We have been there, spent close to seven hours in the environment with community members both those on ground and those outside and the JTF both field level persons and the highest command. We have gathered some facts and we are in some position to make a difference between emotions-laden propaganda both from the JTF and the society. We are currently engaging and discussing these facts with stakeholders to come through with perspective on what needs to be done.

'However, our immediate priority is not to engage in the traditional blame game and stereotypical behaviour that we are currently contending with from all sides of the competing players. Our immediate concern is to give succour to ordinary, innocent, harmless and supportive community people who worked hard to avoid this current ugly incident they now face through their open condemnation of the main culprit John Togo and his NDLF group and their support for the government and security authorities in the effort track down a fleeing criminal and his band.

'Indeed, we must mention that we observed military activities both on two close locations now under the control of JTF where John Togo and his band held as there camp and in Ayankoromor community. 'At Ayokoromor, we confirmed from the community people who are currently on ground that nine persons are confirmed dead, seven of them already hurriedly buried, two in the mogue and many more still missing. We also observed that a good number of houses, probably over 40, on the coastline were destroyed.'

While a lot of persons are still in the community, we observed many more are in the where picked to safe custody at Effurun Barracks and we meet others here at Chief E. K Clerk's house. We empathize with these traumatized and displaced persons. Giving these people comforts and hope remains our priority. On what we see as security challenges, we hope to present our findings and discuss our perspective to the highest security that is the National Security Adviser (NSA) Chief of Defense Staff (CDS) and Chief of Army Staff (CAS), Director of State Security Services (SSS) and Commissioner Of Police etc after which we shall do a comprehensive media briefing.

We call on all Nigerians who can provide professional counseling and material support to suffering community people caught under and now innocent victims the JFT military activities against fleeing band of criminals. Our heart goes for the families of the Nine persons who are reported to have died and those who are currently homeless. May Our Good Almighty God grant them the courage to overcome this current challenge. Let's all work to keep hope alife.