THE HOUSE OBASANJO BUILT IS CRUMBLING 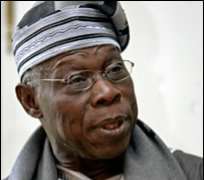 Obasanjo
The house Oasanjo built is crumbling. It's in a free fall. We are not talking about his hilltop mansion somewhere in Abeokuta. That one dey kampe. We are figuratively speaking, not talking about any of the houses built by Chief Olusegun Obasanjo on the Obasanjo Farms. Nor are we talking about a house in relation to his vocation as an engineer. Literally speaking, the man Obasanjo has built so many bridges and houses across the land.

This house has more to do with the man's total knack for social/political re-engineering and regeneration; his building abilities seen through the lenses of his peculiar social abilities; his building abilities seen through his full deployment of political adroitness, acumen and dexterities with their interrelated outcome on the Nigerian nation. Which in particular of Obasanjo's many houses is about to crumble, you may ask?

It all began like a joke sometime and somewhere during the 2003 general elections. Before then, all the six states in the South-west geo-political zone of the land were under the lock, the keys and political grasp of the Alliance for Democracy (AD). The party was so powerful, so sure footed and on the ground in the region in 1999, that Obasanjo's party - the Peoples Democratic Party (PDP) could not win the councillorship contest even in his electoral ward. Nonetheless, the man went on to win the presidency and once more emerged as the President and Commander in-Chief of Africa's most populous and sophisticated nation.

Then, all over the SW geo-political zone, it was the world of the Bola Iges and the Abraham Adasanyas. Then it was the world of all those who were direct or remote disciples of the sage, Chief Obafemi Awolowo. Yes, then, the political protÃ©gÃ©s of the Ikenne Chief who was believed to have been robbed blind, aided and abetted by Obasanjo in 1979, in favor of Alhaji Shagari, were all over town. In recompense, in 1999 they (Awo diehards) had resisted Obasanjo when they reasoned it was payback time - on behalf of the dead sage.

It was also a period of political self introspection for the Yoruba who were 'allowed' to field two presidential candidates having been grossly wronged by the military elite that annulled the 1993 elections widely believed to have been won by Chief MKO Abiola, a Yoruba. Unfortunately while in 1999 the Yoruba had preferred a candidate other than Obasanjo, majority Nigerians or so it seemed 'voted' for him. And he won. And the unfolding story now will forever remain an essential part of Nigerian political history.

When in 2003, the ever crafty Obasanjo entered into a secret alliance with all the governors of the south-west to support him win that year's presidential election (at their own expense) some political observers from within and outside the zone squirmed in resignation. Yes, in resignation because the political conquest of the west by a political party that had no roots in the region was the first of its kind.

It came with disbelief and to some extent, relief. That the region that had given successive political parties which had no roots from the zone, a hard run for their money, would now be part of the mainstream was a welcome quintessence of wait and see. That the region that was a hot bed for liberal ideas, progressive political thoughts and bedrock for political upheavals had been brought into the mainstream, was seen by many as a political master stroke by whoever engineered it.

Followed with the appointment and coming on board of notable Yoruba progressives such as Bola Ige, the scions of Abraham Adesanya and Fani-Kayode into the administration, it appeared that a total and complete appeasement of the Yoruba race had finally been achieved. The massive infusion of assistance (cash and kind) in form of the establishment of industries and infrastructural development of the SW by Obasanjo though incremental, was impressive. With this and many other economic-related incentives, it seemed as though the policy of building a new Nigeria was on course. There was relative calm all over.

The economy was in full throttle as the international community began to take a second hard look at Nigeria. That the regime then could concurrently checkmate few rabble-rouser elements in the north (particularly the monarchs) and keep the East in perpetual check, was the first of its political kind in Nigeria's history. There can be little doubt that the Obasanjo politics in the Nigerian nation of the era (2003-2007) witnessed unparalleled stability, economic progress and robust polity – its kind had never, ever been seen in our clime.

Until the hasty defeat of Obasanjo's third term agenda, some people like us had gone to bed, very sure and rested that intense Yoruba nationalism which has had militating impact on the emergence of real Nigerian nationalism had been put in check by the man. For, whether naysayers like it or not, the stability or disintegration of the Nigerian nation rests squarely on the political mood/trajectory of the Yoruba nation.

Wherever the political direction of the Yoruba nation is, is sure to be the direction of the larger Nigerian nation. Redirect Yorubaland's interest to look inwards as it has always been, and the nation is forced to look inwards and in shameful retarding stagnation. When the Obasanjo administration, therefore, through craftsmanship, politically subdued and redirected the strong-willed Yoruba nation's almost runaway insular nationalism within the Nigerian context, I thought, he had had Nigeria's problems, defined, caught and encapsulated.

We had believed that with the Yoruba coerced into the so-called mainstream of Nigerian politics, that the much-needed way forward for the country had been achieved. That from thence, there would be political stability (even if artificial) in the land, which could in turn be nurtured to reality to enable this ever-young republic to breathe a fine fresh air and trudge on in its search for oneness.

That conducive political environment would usher in economic stability (it almost did) and that in the end, the nation would prosper for the benefit of all. We had believed that being in the so-called mainstream would have helped to dilute the intensity inherent in Yoruba thinking about the place of its people within the larger Nigerian nation.

We had believed that with the restive Yoruba nation in check and the monarchy in the Arewa area of Nigeria diluted, that the nation's political and socio-economic horizon was set for the stratosphere.

We had hoped that there would disappear from the Nigeria political atmosphere, a geographical/tribal segment perpetually in opposition. And that in its place would emerge an ideology-driven political setting. We had hoped that if the people of the SW were drilled to march in lockstep/league with the rest of Nigeria, the Niger Delta militancy would be effectively managed. Because the expected emergent political view rather than tribe would have been essentially, ideology-driven.

Subconsciously, I was worried of what the day after Obasanjo would mean not only for Yoruba politics but its inevitable spillover effect on the Nigerian nation. I had hoped that he would have been around enough to thicken the political glue he had put in place for Nigeria. I had hoped that some people as idealistic, as crafty and pragmatic as him would equally had looked deep into Nigeria's political crystal ball to see what Obasanjo meant. That was what some of us who love Nigeria; who wanted Nigeria's unity and progress, saw when we supported his third term bid. A bid some of us looking from the outside thought though illegal was badly needed in order to consolidate Nigeria's march to stability and progress.

Now all the gains made in form of uniting Nigeria through the caging of SW political beliefs are coming to naught. One by one the states he corralled into the so-called mainstream of Nigeria politics, are finding their way back to where they came from. Yes, it's frightening, to note that where they came from was the regional/tribal politics (some dub it progressive politics) of years gone by. First it was Ondo, followed by Edo, then Ekiti and upper week Osun, where results from the 2007 election have been reversed by the courts. Come April 2011, Oyo and Ogun states would definitely have joined to complete the political re-conquest of the region by the Action Congress of Nigeria – ACN. This would not have happened had Obasanjo been allowed to be around to nurture and groom the political house he began to build in the SW region.

Nigeria would eventually be the loser. It would be the loser because sooner than later, the ACN would begin to be defined as a regional political party. Then, the core north, ever-ready to drum up northern primordial interests and not willing to be outdone or play catch up to any part of the union, would form a ring around a northern-centric political party. Ditto the South-east.

When this happens, the much sought after cohesion which reason I thought Obasanjo brought the SW to the political center would have completely fizzled out. This would set Nigeria back politically speaking, to the years before 1966. And this may usher in the first inevitable step towards achieving the nation's disintegration, which had been predicted to happen somewhere around 2015. Because in the envisaged house of commotion, there will definitely be a big bang. Let's continue to pray.