JONATHAN'S GOOD WORKS SPEAK FOR HIM 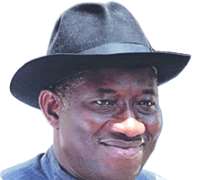 Transition Chairman of Ohafia Local Government Area, Abia State, Elder Bucknor Onuoha has said that zoning of political office, which has been contentious in recent time is an idea which time has passed. According to him, what should be paramount before Nigerians is what the aspirants have to offer and if that being the case, Jonathan is going to have his way because his good works speak volume of what he has in stock for Nigeria. The transition council boss also spoke on the challenges before him in the council and the politics in Abia State.

On the challenges facing the council, Onuoha said the problems are enormous. According to him, he inherited a people that were indifferent towards government.

The people feel that they have been shortchanged having no sufficient impact of government presence. So, the first challenge is to reverse that kind of thought and mindset in the local government.

On how to tackle the energy problem in the area that had no electricity for almost a year, the council boss said because electricity is the fulcrum on which the wheel of the economy of the council revolves, he has on the second day of mounting the saddle constituted a committee that would work directly with the Ohafia Rural Electrification Committee (OREC) to restore power to the local government area. ' From preliminary reports and survey, it will not take time for light to come back to Ohafia. My number one priority now is to bring back electricity to Ohafia,' he said.

On security and the face- off between Fulani herdsmen and the local farmers who allege that cattle are destroying their farm crops, Onuoha said he is aware that this has led to bloodshed in other parts of the country and so won't allow it to repeat itself in his domain. According to him, he has decided to act fast by nipping in the bud whatever problem could arise between the cattle rearers and their host community.

' We have taken a step in that direction by inviting all the traditional rulers, the Nigerian Army, Police, State Security Service (SSS) and the National Security and Civil Defence Corps to tackle the problem headlong. As a matter of fact, this has raised very high tension and it has created palpable fear and the only way we are managing to douse the tension is to appeal to the Eze Ogos of the various communities to go back to their subjects and calm them. Unfortunately, the Hausa- Fulani community was not at the meeting and we intend to meet with them within the shortest possible time to avoid what has led to destruction of lives and property in other parts of the country. There is no way I will encourage the destruction of people's efforts. Agriculture is the mainstay of our people here and if they labour only for cattle to come and destroy their crops, it is not good and should not be encouraged. However, we will not allow it to resort to a fight.'

On the ecological disaster in the area, the transition council chairman, regretted the extent of soil erosion in the area. His first step towards solving the problem is to identify the sites and draw the attention of the appropriate authorities. ' These erosion sites in the area are not something that we can handle at the local government level. Because of the magnitude, it's only state or the Federal Government that can handle them.'

The council boss noted that any government which fails to carry the youths along is doomed and in this direction, he has articulated a programme that is rewarding for the youths in order to divert their attention from crime, immorality and anti-social behaviours. ' We have engaged consultants planning football tournament across the 19 wards in the local government. The tournament is yet to be named and in the end, we intend to produce an Ohafia L. G.A. United club that will takr part in other competitions in the country.'

Onuoha called on the people of the local government to support him and the Abia State governor, Chief T. A. Orji. He assured them that the council would witness a new dawn within the period he will hold forth as the council boss. According to him, he would transform the local government area beyond the imagination of all since he has known what the problems are.

' I have already received tremendous cooperation. The applause that my nomination generated is fantastic and I least expected that I was that popular. On my side, it is my responsibility to reciprocate in a greater dimension. We laid policies on ground and I have mapped out a lot of things to do since 2004. The problems are there and as resources are made available, we would do our very best. I am going to make Ohafia, a local government whose reputation for excellence and forthrightness will be second to none and everything we shall be doing must of necessity reflect this ethos. I want to be remembered after my tenure as someone who came around and did his very best for the generality of our people.'

' The direction we have followed is where the mainstream of Nigeria political hub is, which is the PDP and that was why we all beckoned on the state governor, Chief Orji to lead us back to the mainstream of Nigeria politics so that the state would get what others are getting. This is in the overall interest of Abia people. We had been in the opposition without anything to show for it. I believe Ochendo took a wise decision to save the state. I appeal to every Abian to rally behind him in his untiring efforts to position the state on the path of greatness.

On whether Nigeria is turning to one party state, Onuoha said, it may never happen because President Goodluck Jonathan has assured that there is going to be a level playing ground for every candidate. However, he said that the quality of candidates in PDP is higher than other parties and this is why they win elections and it seems that everybody is in PDP. Onuoha called on Nigerians to believe the President on his position on conducting the most credible election in the history of this country.

' I believe there is going to be transparency and the vote of the people would count and that is what we are looking forward to from the local government level to the federal. We will ensure at all times that transparency and fairness is put into the political system. However, in Abia State, we are ready for opposition. The people will vote according to their choice - when you have done popular things and have put in place popular programmes, people are going to follow you and that is the case with the state governor. Abia people are behind him because he has put in place popular programmes.

On the position of President Jonathan running for the 2011 presidential election against the backdrop of zoning in PDP, the Ohafia transition council boss said, zoning is hackneyed and that what Nigeria needs is a result oriented person like Jonathan. ' We have seen Jonathan in office for a couple of months and the results are manifesting everywhere and that is what the people want, they want dividends of democracy to be delivered to them and whosoever does that is the person who Nigerians want and that is why the clamour for Jonathan in 2011 is so loud in every part of this country.'

Onuoha advised all the other PDP presidential aspirants who are playing ethnic sentiments in order to get the party tickets to drop such issues and come out with their programmes. ' Playing on ethnic sentiments by insisting on the North to produce the president is not what we should be talking about now. We should concern our selves on what unites us instead of what divides us. Nigeria should join the rest of the world by bringing a change in leadership. All over the world the issue is generational change in leadership. After 50 years of independence, we should have come of age as a nation to jettison all those issues that have kept us where we are now. Though we are said to be backward after 50 years of independence, with the coming of Jonathan on May 29, next year, Nigeria will begin a steady march to development and anybody who is opposed to Jonathan's presidency is against the people.'

While commenting on the readiness of the Independent National Electoral Commission (INEC) to conduct credible polls against the knitted election timetable, Onuoha said a reputable citizen who will not allow anything to dent his credibility heads INEC.