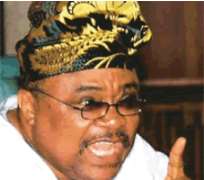 The crisis in Oyo State Peoples Democratic Party (PDP) stemmed from the imposition of candidates at both party and government levels. Leadership was recruited in the most undemocratic and tyrannical manner in defiance of democratic principles, constitutional guidelines and court orders.

The 2007 primaries that gave birth to the present crisis in state PDP were anything but democratic. Virtually all the candidates were singlehandedly picked and imposed by the late Chief Lamidi Adedibu and they paraded the least academic credentials with lowest popularity. In a manner typical of Obasanjo administration, court orders that should rein in these fascist tendencies were trampled upon by Adedibu and his henchmen.

In a gestapo fashion, armed thugs were ruthlessly unleashed on implacable opponents who refused to be part of their 'garrison' command structure. Party members and chieftains consequently became disillusioned and alienated. One of the chieftains, Senator Lekan Balogun, who is today the icon of this progressive struggle initiated the litigation that produced the court order of 27 February, 2007 that restrained the conduct of the so-called congress that purportedly gave birth to the illegal party's Exco in the state. One major effect was the factionalization of the party in the state.

Efforts at reconciling these factions were reluctantly initiated by the national party in a belated response to the demands of the opposition. First, was South West Zonal PDP under Alhaji Tajudeen Oladipo who in the end proved a compromised and a partial umpire. He therefore lost the trust and the initial support of the stakeholders on the opposition divided which in the end scuttled this intervention effort. Next was the Shuaib Oyedokun-led reconciliation committee.

The report contained better ideas at reconciling the warring factions. Of important note were the proposals to set-up the Implementation Committee and the Elders Committee. While the former which comprised the nominees of the stakeholders was hobbled by internal intrigues subtly aimed at truncating it, the latter was unduly and unilaterally expanded from 25man-membership proposed by the committee to 45 by Alao-Akala which in the end became deadlocked giving way to the inauguration of yet another committee headed by Senator Ike Nwachukwu. Proposals were made for the inauguration of the 19-member Implementation Committee to fill the place of non-existing party's Exco and the setting up of the Elders Committee.

Both proposals emphasized the principle of collective leadership in their composition and functionality. Most controversial was the Implementation Committee that Akala struggled to dominate and influence. The death of ex-President Yar'Adua unfortunately affected the implementation. Meanwhile, Akala has continued to lay false claims to the authenticity of the illegal Dejo Afolabi-led party's Exco in defiance of court orders.

President Goodluck Jonathan has proved unhelpful in resolving this crisis. While the party Chairman, Dr. Okwezilieze Nwodo, was passionate about moving the party forward by reforming it, the Presidency and the Governors' Forum were set for a confrontation with this reformist agenda of the Chairman which invariably was whittled down. One major effect on the Oyo State PDP is the current stalemate to the benefit of Alao-Akala administration but to the disadvantage of PDP as a whole.

Meanwhile, the governor's megaphones have gone to work to feed the unsuspecting public and the higher echelon of PDP with half truths and outright falsehoods in a futile effort to turn the table in their favour. One of these half truths is the description of notable and popular members of the party as 'renegades'. Another is the insinuation that such members are no longer members of the party. These falsehoods have been carefully concocted against people perceived to be a threat to their re-election bid in 2011 elections.

This is predicated on the claim that these prominent members, chiefly, Senator Rashidi Ladoja and Alhaji Yekini Adeojo worked for ANPP and Labour Party in 2007 elections to make their representation in the State's House of Assembly possible. This is also meant to sow disaffection among the ranks of the opposition as well as the national leadership.

Assuming this is true, how then do we situate the action of a disloyal deputy-governor colluding with some reprobates within the same party to scuttle the tenure of a properly elected governor through illegal and unfair means? Singling out the likes of Balogun for commendation for being faithful to the party in the two previous elections, we are inclined to ask: What have they got in return? Rather, they have brought in erstwhile opponents of the governor who never contributed to his election success to partake in the benefits of this administration.

The often-repeated claim that the opposition is waging an ethnic war is Machiavellian. Needless to say that the same Ibadan elite led by Adedibu were instrumental in making him governor over his boss who is a fellow Ibadan man a few years ago. This much he acknowledged by openly prostrating for the old man shortly after his inauguration as governor. We are therefore constrained to ask: ere these men ignorant of his Ogbomoso background? It is interesting to note that the governor's megaphones could be credited with a fair share of giving this regime its odious public perception. Rather than logically and rationally address criticisms that often border on the performances of the governor, they have compounded Alaka's image crisis by choosing to be abusive and combative.

The NURTW crisis has further demonstrated Akala's aversion to public order, supremacy of law and the general will of the people. Nothing can be more demeaning to the image of the party and the office of the governor than the odious romance between the governor and members of the state's NURTW who are not only active participants in the governing process but have now constituted a paramilitary wing of the state's party.

This administration has scored abysmally low in its constitutional obligations to the citizens. The near-total absence of physical and human development in the state is a sufficient indictment of Akala and PDP as a whole. With the loss of Edo, Ondo, Ekiti and Osun states, it is a payback time to the past garrison commanders in the PDP who worked hard to enthrone fascism in the party to the detriment of good governance and economic development.