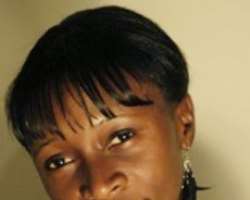 Information reaching us says the director of recently premiered mega-bucks movie 'Sinking Sands', Leila Djansi (also Director of AMAA-winning, 'I Sing of a Well') has caused the arrest of her Personal Assistant (P.A), Delali, and subsequently new actor Senanu Gbedawu of Checkmate fame.

According to sources close to Leila, the P.A allegedly forged her signature and 'cleared' her bank account, spending money meant for activities of Sinking Sands, on her alleged lover, Senanu Gbedawu. The actor was arrested yesterday. The P.A is said to be dating Senanu for some time now.

Leila Djansi was preparing to leave for her US base when she realized this development on withdrawing some cash from her account.

She suspected her P.A and reported her to the Legon police who picked her up on Legon campus, where she was lodging with a relative, student of the University of Ghana.

Sources say money meant for media executions were not disbursed as planned “This may be a reason for the low turnout for the premiere”, Leila was said to have told a crew member. Sinking Sands was premiered to a virtually empty auditorium mid November.

Neither Leila nor Delali could be reached for comments at press time, though information has it that both P.A. and Senanu were bailed on Wednesday.

As you read this, Leila has returned to the U.S for a week.