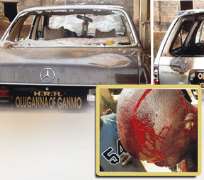 Vandalised vehicles and an injured person after the crisis.

The victims affected by the communal crisis that erupted in Ganmo, Ifelodun Local Government Area of Kwara State, have accused the state government of neglecting them.

A policeman was shot dead, two houses were set ablaze and about 15 persons sustained injuries at the Ganmo praying ground during the Sallah prayers on November 16, when the families of Oba Atanda Kolawole and Okunoye from Idi-Ape were locked in a supremacy battle over the ownership of the community.

When our correspondent visited the community on Tuesday, about 13 vandalised cars were seen at the monarch's family compound.

Speaking with PUNCH METRO in his palace, Oba Kolawole appealed to 'all well-meaning people and lovers of the community to put pressure on the government to compensate the affected families, as the losses are beyond our capacity.'

The monarch also called on the police authorities in the state to fish out the perpetrators and bring them to book.

'The Ganna (Ganmo) family wishes to emphasise that if this latest attack goes without any form of deterrence and punishment, this impunity will continue and this family will continue to be at the receiving end. Let all men of goodwill be counted on the side of truth and justice,' he added.

Meanwhile, the state government has donated cash and relief materials valued at N15m to 470 victims of various natural disasters in the last one year in the state.

On the occasion, Secretary to the State Government, Alhaji Saka Isau (SAN), who was represented by the Permanent Secretary, (General Services) Governor's Office, Shehu Muritala, urged the beneficiaries to guard against self-inflicted mishaps.

He added that the government would only give 'monetary succour to victims of natural disasters,' noting that those compensated included victims of rainstorms, fire disasters and flood mishaps drawn from the 16 local governments in the state.

Besides, he explained that 20 villages were swept away by flood, rendering many people homeless.

'The worst hit persons were those who had borrowed money running into millions of naira to implement the FADAMA project along the bank of the Niger. They have lost all now, it is pathetic,' Ogungbe said.

Our correspondent gathered that the victims of the crisis might not be compensated to discourage self-inflicted disasters.

A highly placed government source said, 'This is not a natural disaster. If it were, the government would be compelled to offer some reliefs and compensation. If we do that now, we will be setting a bad precedent.'

It was learnt that 11 suspects had been arrested by the police in connection with the crisis in Ganmo.

The Police Public Relations Officer, Mr. Ezekiel Dabo, confirmed that the 11 suspects, including a military officer, had been moved to the police headquarters in Abuja.