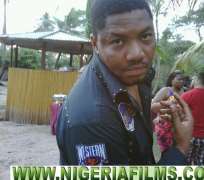 What is happening to you Ernest?

A lot. Right now, we are at the final stage of bringing out my musical album. I have also shot videos that are about to be edited, so they should be out soon.

You seem to have taken a very long break from the showbiz scene and a lot of your fans were actually worried, most especially because your album was supposed to have been released since last year?

Well, it's all about promotion. We intended to do a very good promotion and get the packaging right. I have a couple of new films in the market now and some are about to come out. When you have more than a talent, you must find a way to carry all of them along. Movie has given me all the fame, but like I always say, music is my first love, so right now, I must find a way to use the fame I got from moviedom to carry the music thing along and also strike a balance between the two. I'm also going into productions because I intend to produce my own film soon.

You played the lead role in a Yoruba film recently and people were so surprised that you could speak the language so fluently?

As a matter of fact, I was born in Lagos State, so speaking Yoruba language should be very easy for me.

Now that you have decided to play music professionally, how do you intend to combine it effectively with your other talents?

I think God is the master of all, anyway, we are just trying our best in whatever we do to work towards perfection. Me and my label, Samba Unit, have been trying to make sure that everything fall in place. Showbiz is all about exploring all you can lay your hands on, so I need to do the right things on the album before releasing it.

So what can you tell us about the album?

First of all, expect everything from the album because I'm trying to explore virtually every genre of music. You can expect dancehall, pop, hip hop and the fusion of highlife. But the basic thing I'm trying to figure out is the appreciation of the talent God has given me, which we all need to acknowledge. You are here today by the grace of God, not because you are better than the man that died last night. We need to lay more emphasis on what He has done in our lives and it is by doing so that He will do more for us. Sometimes in life, we tend to attribute our success to hard work, but I can tell you that success is not about how hard you work, but the grace of God. I'm not saying that hard work doesn't pay, but it is the grace of God that make all things possible. When some people attain success, they forget God and think that they are self made and that is when they derail. People need to be conscious of this fact and as a result, be closer to God in every situation. So apart from doing party songs and all that, I also try to enlighten people on the importance of God in our endeavours. I have a track entitled Na You and it is a track dedicated to thanking God.

A lot of music critics are of the opinion that apart from danceable beats and all that, most Nigerian music of today lack good message. How do you intend to make a difference with this?

One thing is that people listen to music for different reasons. Some people get encouraged when they listen to inspirational music; songs that talk about their situation. Also, people listen to music because they want to celebrate and don't care whether the music has got message or not. They just want to dance in the club and forget their sorrows. And that is where the kind of music that most people play in Nigeria now come to play. Most people now do the swagger thing in vogue, but there are still people that play conscious music and they have their listeners. Above all, it is a gradual thing. The music industry is just growing and as time goes on, people will find the actual kind of music they can relate with. It is an individual thing and everybody actually has the right to do or listen to any music of their choice.

Life is all about challenges and the stronger you stand up to face the challenges, the better. I always tell people that the best way to make challenges easily depends on the in-depth of God in you. In all, I give God the glory.

So you have problems with some people in the movie industry?

Not at all. Like I said earlier, this is something I have always wanted to do. If you have three children, for instance, and one of them has graduated, will you ignore the other ones simply because the first one has graduated? Music is just one part of me that I have to exploit.

But the rumour we heard was that some movie makers decided to blacklist you as a result of the crisis you had with the authorities of MITV some years back?

There is nothing like that, trust me. I have been working and I take my time to choose the kind of script that I work on. You will get to a stage in your career that the kind of jobs you do must be the ones that will pass a good message across. I'm not looking for fame any more, so whatever I do now must be of good standard. It is only the green horns that can take any script now. Any movie that is not passing a good message across to the people, will not be accepted by me.

Can you shed some light to the incident that happened between you and MITV authority some years back?

There is no need for that, however, at the appropriate time, I will do the right thing. So let's talk about something else.

How has life been with you generally?

Thank God. I have been living a good life. The first miracle that can happen to you in life is to sleep at night and wake up in the morning. God has been extremely good to me.

You got married early last year and it was like a surprise of some sort to some of your fans?

They shouldn't be surprised because those that are not up to me are married and vice versa, so it's not supposed to be a thing of surprise.

And how will you describe the lucky woman?

I can say that she is the best thing that has ever happened to me. She is just my everything. She possesses the two qualities that I look out for in a woman—the fear of God and humility and above all, she loves me so much.

That was what attracted you to her?

What else would have attracted a man to a lady than the qualities I just mentioned? Maybe you are expecting me to say beauty. Yes, she is very beautiful, but that was not what I look out for. I can as well marry an ugly girl if she has the qualities I want. Beauty is what a woman has got inside her, not the facial things that most men look out for. I wasn't looking out for the most beautiful or most ugly girl in Nigeria, all I wanted was the inner beauty and my wife has it.

A couple of years back, Nollywood was unarguably the best in Africa, but right now, it is facing tough challenges from other countries like Ghana who has been giving Nigerian actors conditions to work in their country. What do you say to this?

It is so crazy that these people are now giving us conditions to work in their country. They've been coming here to work and nobody was giving them any condition. We made their industry and it is ridiculous for them to pay us back in such coin. I learnt that our own people have also slammed a fee on them too, but why should they, the Ghanaians, be the ones to start it? I don't really see any reason for this controversy in the first place because we are one. Whatever glory that Nollywood gets is a credit for the whole of Africa, same to Ghana, so what is the reason for the fight? But if they insist on doing this the way it is now, we should also let them know that we are no fools. The industry is still growing behind Hollywood and with hiccups like this, we are not going to get anywhere. When you have a divided house, there is no way that improvement can come. Nollywood, for instance, is nose-diving due to the internal crisis happening here and there. But I know that we will get over it soon and move forward.

Quality wise, will you say that Nollywood movies are improving or what?

Rome was not built in a day. I think there is an improvement compared to what it was about five years ago. Where I think we might be having some problems could be in the area of story telling and all that. We lack suspense. When people watch the beginning of our movies, they already know where it is going to end; we don't play on people's mind and I think that has to do with scripting. It is a gradual process anyway, but those things will not come in place when our house is not in harmony. Look at the music industry, I don't think we even have one about seven years ago, but it is the best thing that is happening in the world now. Nigerians have taken over the world musically and I know that will happen to Nollywood soon.

In one word, what will you say is the bane of Nollywood?

It is just a summary of what I have been saying since. We need that trinity, that one mind thing. I know it is not easy, but it is possible. When we speak with one voice, we make more progress.