I’m not a saint —Ngozi Nwosu 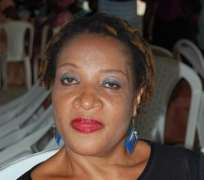 Ngozi Nwosu is a known face in the entertainment industry, she's popularly called Madam V Booth and Peace due to her roles in Ripples and Fuji House of Commotion respectively. Her career started in 1985 and since then she has not looked back. She is a versatile actress, doing great in both Yoruba and English segment of Nollywood. ODUNAYO OREYENI and BUSOLA FATUNKE met her. Excerpts:

You've been a known face of over two decades in the entertainment industry; did you start with Yoruba or English movies?

I started first with English movies, from English to Yoruba, then to 'Living in Bondage' which made Nollywood today.

Which is the particular English movie you did first?

I don't think I can remember because I've really come a long way. I started with the Nigeria Television Authority (NTA), the dramas we used to do then were called 'The Theatre Household'. That was where I started from and from there moved on and along the line I was modeling as well. Then I moved to Yoruba, from Yoruba I was still doing my English thing, then I was still shuffling between all: modeling, English and Yoruba films.

What was your dream while growing up?

When I was growing up actually, I was dreaming to become a broadcaster because then I used to watch Julie Coker, Sienne All-Well Brown and a whole lot of others'. I admired them a lot. So I was like okay, when I grow up I am going to be like Julie Coker that was what I used to say.

But you are not far from your dream because all is still under entertainment?

Yes because all is under limelight, broadcasters and the people that act as well are in the limelight. So it is still under entertainment.

How and when did you get your first role?

Before I did Ripples, I had already done Mind bending by Lola Fani-Kayode. But people used to call me Madam V-booth because of ripples. It actually brought me to limelight even though I had been doing other roles.

Tell us your family background.

I came from a family of four. I'm a Nigerian, it doesn't matter the state I'm from. I grew up in Lagos. It is just because I'm a popular face if not; honestly they won't know me in my village because I hardly go home. My parents are late, may their souls rest in perfect peace. For my educational background, I attended Maryland Comprehensive High School but I eventually finished at Rosary High School, Anambra and then I did my O/Levels. I later went for three years training in Acting and Dance. I used to be part of those kids at school who dance Awa De Awa De (a Yoruba play song). Drama has always been a part of me.

When did you start acting professionally?

I started acting professionally in 1985.

Looking back, what do you think you would you have done differently in the entertainment industry?

My life is very simple. If I feel I'm doing anything wrong, I retrieve my steps immediately. Things that are behind me are in the past. We are human beings and we're bound to make mistakes. Life is all about live while you can because it is too short. When you make a mistake, don't carry it to heart, let it go. That's life.

Can you share with us some of your memorable moments in the entertainment world?

For me, it's been nice. Even if I come back to this world again, I would still choose my profession because I love it. It is entertaining. It could be stressful but while you are doing it, you are happy. Acting is something I've come to realise that it keeps people together no matter how problematic or difficult that they are because we need each other. As for something I can never forget, it would be the death of my mum. After she died, I saw life as if there was nothing in it. She really suffered for the four of us after my dad's death. Even though she enjoyed the little she could from us I still wish she were still alive today to reap the fruits of her labour. This year made it 10 years since she died. So, death means nothing to me now. If I see someone hit by a vehicle lying dead on the floor, I just say “sorry o”.

Can you share with us some of your embarrassing moments?

I get it everyday. In fact a lot. There is this thing about some people. They just hit you at the back because you are a star or something. I don't like it. It can be so upsetting that I would feel like slapping the person but I would now remember that I have to control myself because of my kind of profession. There was a day I was having a little problem with someone, another person then said that I was exactly the way I act on TV. I then told the person that she was stupid. I'm not a saint simply because you see me on screen. There is an element of madness in everyone and acting is just make believe. Acting a negative role doesn't make me a negative person. That doesn't mean people should provoke me just to see what I can do. I will bounce back.

As an African woman the society expects one to be married, what is your take on that?

If as an African woman you find a happy home, why not? The Bible says “he who finds a wife finds a good thing and obtains favour from the Lord”. I have never seen an African woman who says “I don't want to get married”. Everybody wants to be called Mrs. and belong to somewhere. My idea of marriage is to pray first to God to give you someone you can live with for the rest of your life. I am not of the opinion that if you are dying there you must remain there. In as much as marriage is an institution it must be respected.

There is nothing like I will manage it in marriage. If the man or woman possesses a kind of funny character if you guys are dating, don't think you can change him or her. No, no, no, you can never change her. Just make sure your partner is who God has given you and both of you work hand in hand.

Are you saying God has not given you your own man?

What should we expect from you soon?

I'm working on a lot of things right now but I don't want to talk about them till they are out. Presently there is Terima and watch out for GRA Women. I've also done Holding on Hope, it is in the market now and a couple of others that are not yet out.

What would you describe as your low moment?

My low moment is when I am broke.

What about your high moment?

My high moment is when I'm happy as well as when I'm in the church.