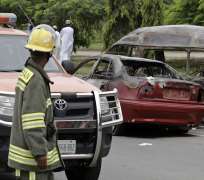 ABUJA, Nov 25, (THEWILL) - An Abuja Magistrate Court today rejected the bid bail of suspects arraigned in connection with the Independence Day bomb blasts in Abuja. The suspects through their counsel protested against their continuous detention by the State Security Service (SSS). Their counsel argued for their bail application before Chief Magistrate Oyewunmi Oyewole of Abuja Magistrate court saying the accused should be granted bail if the SSS is not ready to arraign them. Two of the suspects were however released after the counsel to the SSS, Mr. Charles Osagie told the court that the agency had decided to withdraw the First Information Report (FIR) filed against them. Those released are Emmanuel Pathfinder and Emmanuel Alison.

Other suspects who were arraigned today are Edmund Ebiware, Edward Damfebo, Ernest Nwosu, Obi Nwabueze and Charles Okah. Mr. Osagie told Chief Magistrate Oyewunmi to adjourn the case as they were nearing the conclusion of their investigation which would allow the service file proper charges against the accused persons. He also told the court that the Nation’s Chief Law Officer may be interested in the matter during the next adjourned date. Chief Magistrate Oyewole thereafter adjourned the case to the December 08, 2010 for further hearing.