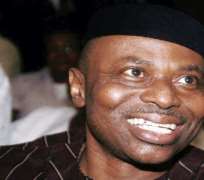 LAGOS, Nov 25, (THEWILL) - Ondo State Governor Olusegun Mimiko Wednesday attributed lack of funds at the state level and the over-centralisation of such at the federal level as part of the factors hampering ecological problems, prevention and control in Nigeria. The governor, who sought immediate decentralisation of the Fund, called on the federal government to immediately evolve urgent proactive intervention measures that would address the lopsided situation forthwith. Mimiko made the observation while delivering his goodwill message to the National Committee on Ecological Problems Stakeholders Forum in the South West Zone held in Akure, Ondo State, lamenting that the meagre resources at the disposal of state governments cannot cope with the gamut of ecological problems. He canvassed the sharing of the Funds while leaving some for direct intervention in cases of ecological emergencies, thereby citing the cases of critical ecological problems the state has been facing to the gathering, which included the Minister of Environment and Chairman of the National Committee on Ecological Problems (NCEP), Mr. John Odey. He said the state ecological problem requires the urgent attention of the federal government and asked for help “to assist in pushing our case to the concerned federal agencies.”