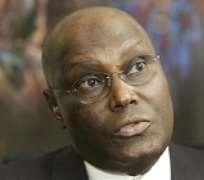 Few days after the Adamu Ciroma led committee picked ex Vice President, Atiku Abubakar as the 'northern consensus candidate', a fresh plot is brewing among his peers with the intention of throwing spanner in the works for him.

Atiku, who knocked out Babangida, Saraki, and Gusau, is facing formidable opposition from some northern Governors who feel the criteria that gave him the number one spot was skewed to favor him.

Meanwhile, Pointblanknews.com learnt that the Babangida camp is presently unhappy with Ogbeh and Jemibewon for what it tagged betrayal, since according to them, the duos membership of the committee was influenced by the gap toothed General.

According To our source” the IBB camp is very unhappy with Ogheh and Jemibewon. It was Babangida who ensured the got spots on that committee, with the understanding that they would join Ciroma, Dambata and co to pick the nomination.”

Pointblanknews.com gathered that Ogheh who had earlier promised the Babangida camp and Ciroma to vote for the former military President, pushed for a secret ballot to shroud his preference for Saraki.

This is coming on the heels of the resolve of the Adamawa PDP not to recognize Atiku as the northern candidate.

According to our sources, the trio of Nyako, Waramako, and Lamido have met three times since Atiku was announced. Tagged the G3, they met last Monday night in Dutse, the Jigawa capital. The previous meetings held in Yola and Sokoto. Yuguda joined lately.

Pointblanknews.com sources hinted that the grouse of the quartet which is reaching out to other colleagues is that Atiku is not a loyal member of the Peoples Democratic Party(PDP).


According to them, Atiku forced his way back into the party, arm twisted the national leadership into giving him a waiver, even when his state chapter was reluctant.

Another very curious issue raised by the quartet is the Jefferson bribery scandal involving Atiku, but the pro Atiku camp dismissed the issue, pointing out that Babangida has heavier and more slimy baggage in June 12 annulment, death of Dele Giwa and the gulf war wind fall.

Our sources said Nyako has vowed to stop Atiku and take all his loyalists, including Governors and National Assembly members to the President Goodluck Jonathan's camp.

Deputy Director of the Babangida campaign organization, Senator Kanti Bello recently described the choice of Atiku as mind boggling. According to him “ Atiku is not the most qualified. We trusted the Ciroma committee to pick the right candidate , but picking Atiku is beyond imagination. Babangida is my choice , he is the only one who can perform and bring us success. On wether I will back him, as a human being, I have to think about it”

Nyako who is Atiku's political foe severally blocked attempts by Atiku to join the PDP in his home state, even after the national leadership had received him in Abuja.