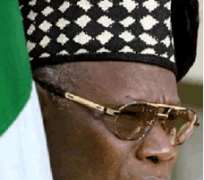 The emergence of former Vice President, Atiku Abubakar as the consensus aspirant of the Northern political leaders in the ruling Peoples Democratic Party has rekindled the old rivalry with his erstwhile boss, Chief Olusegun Obasanjo.

The former president is said to have gone back to the trenches, not only to scuttle Atiku's chances but to also ensure that the emerging political homogeneity in the north is broken, leaving the zone in fragments too weak to achieve the unity required to clinch the presidency.

Daily Sun learnt last night that the former President is determined to undermine the Mallam Adamu Ciroma-led Northern Political Leaders Forum [NPLF] by raising a challenge to break an emerging solidarity in the zone, which has already seen the major contenders namely Ibrahim Badamasi Babangida, Governor Abubakar Bukola Saraki and Aliyu Gusau abandoning their quest and pledging to support the aspirant that has emerged.

We gathered that Obasanjo is already looking beyond the Ciroma group to rally support for the emergence of 'Northern Alternatives' to replace Atiku in the event that a Jonathan Presidency becomes a hard sell. Four current governors, two apiece from North West and North East are already on the card and the former president is working assiduously to throw up one of them as the alternative in the event that the bottom falls off his support for Jonathan.

Daily Sun learnt on good authority that the meeting of three governors in Jigawa two days ago convened by Governor Sule Lamido may well fall into the former president's agenda of producing an alternative aspirant, a move the governors have already owned up to constitute the sole agenda of their meeting even as they insist on not being propelled by anybody.

Meanwhile the three governors, now known as G-3 included Aliyu Wamakko of Sokoto and Murtala Nyako of Adamawa say their move is an altruistic one to save the ruling party from itself given the obvious polarization now ensuing with the apparent abandonment of zoning.

Former President Obasanjo , an informed political leader from the north told us yesterday, even before the emergence of a consensus aspirant, had reached out to the gladiators, through third parties, to drop their ambition.

However, it was gathered that the move by the former president may have hit the rocks following Atiku's emergence as the consensus aspirant. But Obasanjo appears undeterred, according to sources, in his sworn quest to discredit Ciroma and the Northern leaders by his plot to raise a challenge to what a source privy to the plot describes as 'alternative consensus candidate'

An informed leader who claims to be privy to Obasanjo's manouvres said the former president needs to be stopped before he jeorpadises the collective interest of the north and, by extension Nigeria. He railed against Obasanjo for openly encouraging President Goodluck Jonathan to run in 2011 in breach of the power sharing formula which he said is enshrined in Section 7 of the amended PDP Constitution.