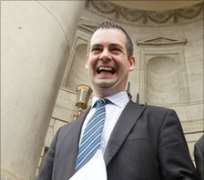 Voters cast their ballots
The grip on power of the Irish Republic's coalition government looks set to slip further as a by-election gets under way in County Donegal.

Fianna Fail, along with its allies, can muster a majority of only three seats, just months, or possibly weeks, before an expected general election.

Its candidate in Donegal faces a tough challenge from Sinn Fein.

The party hopes to pass an austerity budget next month, having agreed to a massive international bail-out.

Running a budget deficit equivalent to 32% of GDP this year, the eurozone state is expected to borrow about 85bn euros (£72bn, $114bn) from the EU and IMF.

Uncertainty over Ireland's ability to stabilise its finances continues to hurt the euro.

The currency fell by almost half a cent to $1.3325 on Thursday, and has now fallen by more than three cents this week.

Traditionally a safe Fianna Fail constituency, the seat became vacant 18 months ago when the sitting TD (member of the Irish parliament, or Dail), Pat “The Cope” Gallagher, was elected to the European Parliament.

Brian O Domhnaill is hoping to retain the seat for the party against four challengers, of whom Sinn Fein's Pearse Doherty is seen as particularly strong.

Mr Doherty had taken court action against the government to force the by-election, successfully arguing that it was unconstitutional to keep the seat vacant for so long.

The other candidates in the by-election are Barry O'Neill for Fine Gael, Frank McBrearty for the Labour Party, and former Sinn Fein councillor Thomas Pringle, who is running as an independent.

Sinn Fein described it as a plan for national recession.

Vacant seats
Yielding to pressure from his own allies, Mr Cowen has promised an early general election but insists it should not take place until after the Dail votes on his budget, on 7 December.

Fragile majority
Coalition has 77 seats out of the 166 in the Dail
With four seats vacant, it needs 82 to pass legislation

It can count on the support of four non-coalition members, bringing its total to 81

The Green Party, the junior partner in the coalition, has called for the poll to be held in January.

A recent article in the Irish Times newspaper suggests the government's hold on power is precarious, with the support of several nominally allied TDs not guaranteed.

Including Donegal South West, four of the 166 seats in the Dail are currently vacant, meaning the coalition needs at least 82 to pass legislation.

The coalition has 77 seats: 70 for Fianna Fail, six for the Greens and one for a former Progressive Democrat.

It can further count on the votes of two former Fianna Fail TDs and two independents, according to the Irish Times.

But the support of another three TDs cannot be taken for granted. These include one who was expelled from the party over a stag-hunting bill, one who recently opposed government health cuts and one who left Fianna Fail in 2008 over a different health reform.

Victory for Sinn Fein in Donegal would bring its number of seats in the Dail to five.

The by-election result is expected to be declared officially on Friday evening.