NOLLYWOOD GOES ABUZZ AS ‘CHAMPIONS OF OUR TIME’ PREMIERES IN LAGOS 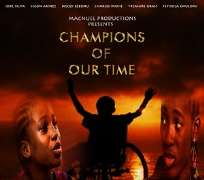 Red carpet featuring dignitaries and Nollywood stars will start by 4pm at the venue.

'Champions of our Time' revolves around two exceptionally brilliant young girls from opposing ends of the social spectrum. They both nurse ambitions of becoming the next winner of the prestigious St. Flairs Foundation Quiz Competition. However, their quest unravels a web of intrigue, high-stakes politicking, corruption in high places, and a culture of neglect and discrimination against the physically challenged amongst us. Suspence wrapped scenes in the movie showed how far the players went to achieve their dreams in the face of seemingly insurmountable odds?

A brilliant treatment of its topical subject matter, 'Champions of our Time' is guaranteed to evoke empathy and reinforce the belief in the indomitable resilience of the human spirit. It will be in the cinemas all over Nigeria from December 3rd, 2010.