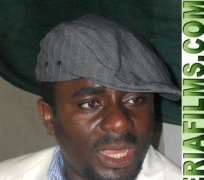 Who doesn't know Emeka Ike? The Nollywood lover boy/badboy is one of the stars you must have missed on your TV screen for quite a while due to the alleged lull in the industry. Morakinyo Olugbiji had a chat with the father of three in Lagos on Sallah Day.

It's been quite a while I saw u feature in a new movie...

No body is making any movie in Nigeria at the moment and that's why you have not seen me featured in any lately. I'm trying to re-strategize. Part's of the problem has to do with the problem in AGN and I'm hoping that once the court delivers its judgment, I will take back my position in AGN as President. Then, we will restructure everything in order to restore the industry back to its rightful place.

So you are still in the AGN struggle?

Yes, the struggle is not over until it's over. I and my team are a law abiding people and for us the only way to go about issues that bother around legality and illegality is to go to court. any other measure you take is illegal and criminal and not acceptable. And as we speak now, there is Status Quo the court has ordered that nobody should do business with anybody parading himself as AGN's president. So, having anything to do with anyone claiming to be the president of AGN is doing so at his or her own risk pending when the court will determine the right president of AGN.

What i hear every now and then is that the movie industry is undergoing a lull, what's your opinion?

One can not underestimate that fact. Nollywood is not undergoing a lull as a matter of fact, the industry is dead right now. if you know how much Nollywood has been trampled upon you will know that there is no movie made right now that is structured on the Nollywood you and i use to know. What you see going on right now are perhaps the small boys around the industry in those days making some of the few movies you have around now. They love the art and since they have not been given any chance decide to call their friends together to do some low budget films. They try to feature a couple of known faces. They are just trying to sustain the business that has been crippled, bastardized, trampled upon and hijacked.

You have been known to always play a bad boy or lover boy role, but i think you are getting more matured even though the look is still there, will your roles in movie change now should a script come your way?

Well like you said, it's true that I'm looking more matured. I will also want you to know that I have now broken into Hollywood too. Talking about the roles I use to play, if i still look the role why then can't I play the role? I just came back from one of the sets of a movie which i did in Hollywood with Hakeem Kazeem who starred in Hotel Rwanda, Jimmy Lewis of PHAT Girls and a host of other top Hollywood personalities. It's titled "Feat of Destiny." It also featured Kera O'Brian of Law and Order. She was my girlfriend and manager in the movie.

You said that Nollywood is dead; don't you think that is too much of a conclusion?

It is dead! By every instrument of measurement Nollywood is dead. If you are an industry that produced a hundred movies monthly in the past and now you don't make seven movies in a month then you have a problem; that's 7/100. That's a failure. Forget the fact that a few like Desmond Elliot, Uche Jumbo, Monalisa Chinda, Stephanie Okereke, Emem Isong and a few others are trying to release movies. Theirs is just a solo struggle of some artistes who love what they do. You see, those are not even producers; they are the talents. So at the end of the day, the real producers themselves are not making movies any more. Where are the likes of Chico Ejiro, Zeb Ejiro, Fred Amata, Paul Obasele, Jetta Amata, Teco Benson, Fidelis Duker and others? I heard the other day where Chico Ejiro was saying 'people are now going to the Cinemas and the industry is churning out good films', but ask him, which movie has he taken to Cinema in 10 years? They said Paul Obasele is doing Eko Festival or whatever, what film has he produced in the last ten years? These people are no longer making any input to the industry and that's negatively affecting the industry, yet they are the producers. The industry is being manipulated by a few who know how the industry works and have decided to joined forces to go to the government in the name of representing Nollywood without even letting others know about their acts. That's criminal. So by now you should know that Nollywood has stopped making movies in Lagos . That's basically why we've not heard Idumota or Ebinpejo Lane on your TV in a long time. So that's how long it was for Lagos . Equally, Onitsha ; Iweka Road , Pound Road and others. That's how long it was for that area. The only few people in business now are the Yoruba film makers. And they need to really watch it before they start to face the same problem the Igbo movie makers are facing. Also government was part of the killing. When the existing Nigerian Film Censorship Board Chairman rose up one day and say that if you are a distributor of movies, stop distributing until you pay me 5million Naira. That was a red alert. He scared them away. Now, what you have now are people watching DSTV Africa Magic yet everyone was watching, no body talked. The movie industry Emeka Mba met in its buoyancy; he came in as the DG of film censorship board and killed it. Do you know that Emeka Mba was the content provider for Africa Magic?

So I guess it's no longer accurate to say Nollywood is the second largest producers of movies as UNESCO positioned it?

We are number two because at the time UNESCO gave us that recognition and that was exactly the time the industry was about going down. You know, we started dying when Africa Magic entered the business. My colleagues were not in the know of what was going on; they kept wearing dark shades and blowing big grammars on the pages of newspapers.' Africa Magic is wonderful, it's this, it's that, blah, blah, blah.' but today, Africa Magic has taken their product to their end users. Do you get the logic? The man that buys the 'Akara' (bean cake) doesn't come to buy from you again, he goes to somebody else to buy the Akara which you produce yet you don't get the money. That's how the death of Nollywood started. Now, Africa Magic's networking has gone round the whole of Africa and beyond. And because the film censors board helmsman is getting returns from Africa Magic, there is no way the exploitation can stop. How can HiTV pay royalty when Emeka Mba is perhaps a friend of HiTV? Almost everybody handling the regulation of the Nigerian film industry is there to play politics and embezzled as much as they can.

Now the image of the country which we've managed all these years has been rubbished, misconstrued, maligned, disgraced and tarnished. What do i mean by that? Now, they make movies on Africa Magic where you have South-Africans answering Nigeria names and acting the roles. And the sad thing about it is that they are treating Nigeria 's core Niger Delta Issues. You hear them using their South-Africa accent to say that Nigerian leaders are corrupt. And I'm asking, what's the DG of the Nigerian censorship board doing? There is a movie on MNET called Jacob's..... Trouble or what do they call it where they discussed the Niger Delta issues and I'm wondering who vetted that script. What's the rebranding Nigerian message in that script? An Emeka Ike or any other major Nigerian actor will avoid rubbish the image laundering effort of the government but the country is the case in this movies i just mentioned. Dora Akunyili or Goodluck Jonathan cannot see everything, but he has placed somebody there who has refused to do is job. And the likes of us are not involved in the politics going on so there is little or nothing we can do. We don't even get royalties but go to Ghana, there people are being paid their royalties.

Talking about the 200million dollars promise from Jonathan, what do you think?

Talking about that promise being relistic, i don't want to argue it now. I want to believe that the president did what he did in good faith. In every country of the world there is money set aside for the entertainment industry. Now when you have a movie project that we further contribute to the development of the country, the government we assist you with part of the budget already set aside. They do that in South-Africa. if the same thing is what is going to happen , beautiful! but my only grouse about it is that i don't know if President Goodluck Jonathan gave that money to his brother Ben Bruce because he kept saying 'my brother Ben Bruce.' Also my question is who and who represented Nollywood that day? Even if there is a crisis in Nollywood letters should be sent to some core Nollywood stakeholders so we will know who is collecting the money on behalf of the industry