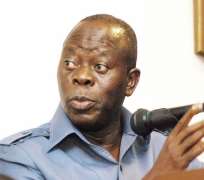 Later, Oshiomhole reported that the only reason he has been able to do so much in two years is because he has no Godfathers and that those who claim to be Godfathers have been chased out of the state and restricted to Abuja. The woman, hearing this became excited: “Who born them? You are the Governor. Governor. Governor.” The Governor continued with his speech. “Osho, Osho, show them, ” the woman said. “Ride on, Governor.” “uhm uhm” “Yes. Correct Governor.” “You dey talk am, I dey hear” “That’s right. You are the man!” “Oh ho. Una hear dat one?” “Exactly” “Yes. Exactly.” “I talk am. Exactly, Osho!” Her energy level kept rising and so was her excitement. By now, those of us sitting round her were stealing glances at her and controlling the temptation to laugh. Eugenia Abu who sat next to her soon confessed that she could no longer resist the temptation to laugh, but she didn’t want to embarrass the woman. Before long, a few of us joined the woman in shouting “exactly” to every statement. While responding to a question, the Governor had said some people in the state including his friends had warned him not to end up like Fred Chiluba, the former Zambian President, a former union leader who failed woefully in political office. But he has always pointed out to such people the example of Brazil’s Lula. When the woman heard Brazil, she screamed: “Yes, let go there. Oshiomhole, I go follow. Let’s go.” We were all in stitches. I looked at the woman, probably in her early sixties, certainly not someone Oshiomhole would like to take on a fun trip to Brazil. But she was unrelenting. She soon got a chance to make a comment, and she told everyone that she and other women in the state are praying for Oshiomhole. Then someone took the microphone and remarked that yes, the Governor has built some schools but many of the schools have no chairs and tables. Oshiomhole explained that he is aware of this, and would work on it. The woman interjected: “make una wait. Una never see anything, you suppose dey patient.” When it was time to leave, she rose to her feet and shouted “Osho!”. We responded: “Exactly!” But more fun awaited us. There was to be a cocktail at the King’s Square, around Ring Road, to mark the anniversary and to launch a newly constructed fountain. The moment I arrived at the King’s Square, I noticed that this was an unusual kind of cocktail. There were too many ordinary, shabbily dressed people flocking into the venue, there was no security control. It was as if just about anybody in Benin could walk in and join the cocktail. I was apprehensive. I became uncomfortable when a group of funny looking boys came along, and I overhead one of them, telling someone on phone: “Make una come oh. Oshiomhole dey give free food for Oba square.” Another one said: “Make we go chop food and greet Oshiomhole.” Another group soon walked past: young girls, also going to eat free food! It no longer looked like the kind of place I wanted to be. But I was curious. We selected a table and sat. Then, it looked like there was a serving point. I went closer, but Oshiomhole’s friends had taken all the small chops. They had devoured the drinks including Champagne. The caterers went to bring another tray of small chops: long hands reached out from everywhere and emptied the tray before it could be set down. Then, someone told them to relax, there would be more to eat and drink the moment Oshiomhole arrived. I didn’t feel comfortable surrounded by that type of crowd. I kept clutching my phones and checking my pockets, and soon I left.Oshiomhole obviously has taken “Labour” into government. But whatever it is that he has done to sustain the ordinary people’s excitement about his administration two years after is perhaps his most striking achievement so far. It is a store of goodwill that he must continue to service and preserve. “Exactly!”