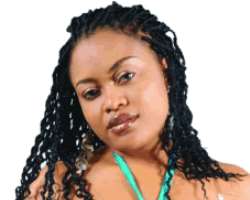 Nkiru Silvanus
'It was like one of those Hollywood movies. Out of the blues comes a queen dressed in an expensive attire reminiscent of an age-long strategy employed to woo and conquer the queen, you as the lead actor plot and wait for the fruits of your efforts, hoping for the best. Alas! You wake up with a startle and realize that those tall wishes were actually a dream and you wonder why?'

This scene aptly captures the triangle of co-incidence that trailed yours truly's desire to meet with an actual queen or better still queen of hope.

Succinctly put, one of the most pleasant experiences in life is a sweet coincidence that actualizes your heart's desire and this appropriately describes my Blackberry chat session, which connected me with someone I so cherished to meet but doubted ever meeting.

Nkiru Silvanus, a household name and one of the most popular and celebrated actresses in Nollywood sprung a surprise appearance with her cherubic beauty, which certainly is captivating and complemented by the very engaging and memorable roles she has fittingly played in top ranking movies such as 'A Cry for Help', 'Divine Punishment', 'Cry Baby', 'Green Snake Under Green Grass', 'Annabelle and Evil Forest', etc. It is therefore to be expected that such a role model will be swamped by numerous fans some of whom wittingly or otherwise will be lurking around to sweep her off her feet.

I started a dialogue with someone in the session named Kisil and got interested in chatting on but all the time presuming my chat partner to be another bored man seeking virtual company on the net. In fact at a point I referred to my partner as 'bros'! But much later my heart almost leapt out of my chest when the soothing beauty image of Nkiru Silvanus emerged on the screen as the identity of my erstwhile chat partner and I couldn't believe it was real until subsequent chats with her confirmed I had indeed finally and unexpectedly established not only contact but dialogue with the screen colossus!

From the distance, I fine-tuned my focus to capture a memorable cherished view of a most cherished person live and direct and not through the limited and edited TV screen. The protocol and the crowds at the event helped to accentuate her entry with a standing ovation, however yours truly was quite satisfied to make do with the 'eye-service', assuring myself slowly but surely, that at the next available opportunity, I shall have a closer contact that will expose her innermost modesty. Basking in the euphoria of that chanced meeting, I surprised her with a 'welcome back' message on the precise day of her return which was quite amazing to her as she kept on wondering  how I knew she was out and arriving then. Perhaps, to her, it must be one person with the power of clairvoyance or had the services of a crystal ball.