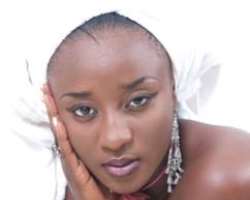 Movie star, Ini Edo who was rumoured to have been entangled with her lover in far away Dubai is in the new again. This time, what the people in the know are saying is uncomplimentary about the pretty actress of substance.
NFC hear in the city that the Calabar born screen goddess, Ini Edo has jus aborted a few weeks old pregnancy she had for one of her secret lover.

Though, the movie idol has not been picking her call when we tried to reach her before this publication.
Ini Edo's reasons to have aborted the fetus at this time in her life, NFC gathered is due to the fact that she's already having it rough with the alleged man who was alleged to have engaged her in Dubai.

Ini Edo who is planning to embark on a trip to London for the shooting of one of the tracks in the highly-rated Yahoozee album of Olu Maintain at the moment is said to have packed up with her supposed to be fiancé while she's enjoying the best of time with another foreign newly catch who is said to be adoring her with gifts and cash.
Tarry a while when we give you a full doze of what she recently got from her new lover.