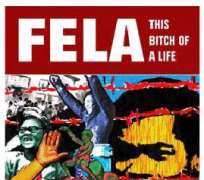 Sections of the Carlos Moore autobiography “Fela: This Bitch of a Life,” which the author claims were used without his permission in the successful Broadway musical, “Fela!” are available only in the Nigeria edition published by Cassava Republic Press.

The two sections entitled “Afa Ojo,” more commonly known as the “Black Pages,” are a mystical aside of Fela's mother calling her son to continue the struggle. Moore is suing the producers of the musical on the grounds that the Black Pages were lifted almost verbatim from the original book even though Moore is not acknowledged as one of the writers of the production, nor is he part of the royalty pool. The Cassava Republic Press version of the biography is the only edition which features the Black Pages. Other versions sold in the United States and the United Kingdom do not.

The court case
Earlier this month, Moore asked the courts to close the show, claiming playwright Jim Lewis and director Bill T. Jones stole his work. In the $5 million copyright suit, the author says in 2007 he was offered $4,000 for the rights to his biography, but rejected the sum as “grossly insufficient.”

Moore says he was asked to consult on the show in 2009, and believed that he would be compensated for this work. But, according to court papers, after he demanded “an advance and participation in the pool,” no other offers were made. Moore claims that his book was to create the musical without his “knowledge, authorisation or consent.” The lawsuit also said Moore also was never compensated for a videotaped interview he did to support the show.

The story of the Black Pages
Carlos Moore wrote the official biography of Fela Kuti in 1982 after extensive interviews with the “Abami Ede” at home in Lagos. At the time, Fela had confessed to Moore that he felt suicidal. Years of police beatings and attacks by the authorities had taken their toll. On his return to Paris to write up the tapes, Moore decided to include two mystical sections where he imagined Fela's mother, Funmilayo Ransome-Kuti, speaking to her son and urging him to continue living. We will never know whether these deeply spiritual pages encouraged Fela to keep on – all we know is that he was ecstatically happy with the finished work.

The Cassava Republic Press version of the re-published biography (available in Nigeria) is therefore a collector's item for those fortunate to be able to get hold of this version. The book includes a brilliant introduction and a moving and frank epilogue by Carlos which contextualise the 1982 story in light of a reassessment of Fela's legacy.