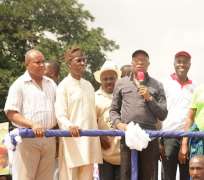 In a statement made available to THEWILL and signed by the National President of the body, Uche Honnah, the Aniomas said they are full of joy as no Anioma son or daughter has ever been at the top of the helm of affairs of Delta State since its creation and are proud that today “we have one even if it is supposed to be for a short period.” The association charged all Anioma indigenes to rally behind the Acting Governor.

“We urge all people of the Delta North Senatorial district to unite behind the Acting Governor and make this period one of tranquility and peace,” the statement said. Honnah said the Anioma people both at home and in Disapora have no apologies for its bold position in desiring for a Governor from Anioma that will govern the state for a minimum of eight years because they believe it will bring greater economic progress closer to the people. “Your Excellency, we do realize that it will be a tall order to expect you to solve all the problems of Delta State in ninety days but we the Aniomas in diaspora can guaranty you that as one of us, we will give you our one hundred percent support,” the association said. Explaining the workings of the AAU, Honnah said: AAU speaks for and is the umbrella body of all Aniomas in the United States of America since its inception in 1997. It has local chapters in all the states in the USA with strong concentration of Aniomas and members convene on a monthly basis in person to discuss issues relevant to Anioma. “It is a democratic organization and has an elected Governing Council (GC) made up of elected executives and elected presidents of the various local chapters spread all over the US. Our claim to being the apex body is verifiable by the facts and what is on ground and we encourage all to visit our website at www.anioma.org for more details about us. “The organization believes in working with all established Anioma organizations and has therefore cooperated in the past with recognized organizations such as Izu Anioma and Oganihu Anioma to bring Anioma people together. That is why in 1997 we agreed that our Greeting and Response shall be ‘ANIOMA NU* OFU OBI BU IKE ANYI’.”