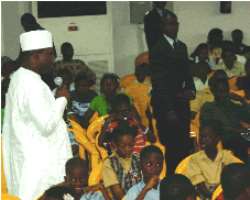 Bankole interacting with children
In a show of support and solidarity for creative arts, Hon Dimeji Bankole, Speaker of the House of Representatives last Saturday added colours to this year's Lagos Books and Arts Festival (LABAF) organized by the Committee for Relevant Arts ( CORA).

The speaker's presence at the 12th edition tagged: Literacy and the notion of freedom, was quite significant even as the event was dedicated to Professor Chinua Achebe's 80th birthday anniversary.

The event which started a little bit behind schedule, featured a children's programme: Talking books with CATE, a roundtable discussion on the works of Amaka Igwe's daughter, the 12-year old Ruby who wrote her first book The land of Kalamanahoo as well as another book by young Mai Nasara: The missing clock.

This was followed by a discourse on whether writers could be rich by writing books. This centred on the financial dynamics of book publishing from the author's perspective. Books such as The outliers by Malcolm Gladwell, Minding your business by Leke Alder and Seventeen secrets of highflying students by Fela Durotoye were cited for the panel of discussants as case studies.

There was also the Writers Angst that mirrored four young authors discussing the Pains and joy of writing and Lagos: 2060 as well as What will be the fate of Lagos 100 years after independence? This segment charts the future of the mega city by addressing its continued role in inspiring, infuriating and enchanting writers across generations, taking a cue from the Lagos; 2060 project by Dada books.

The festival was graced by a few publishing companies, however celebrated eminent Nigerians in the arts and show business circuits who turned 50 and above in 2010. The book fiesta also witnessed inauguration of Nelson fiction series which aims to publish original novels and short story collections from Nigerian authors, both home and abroad.

Bankole, in a brief word of exhortation, told the children to always pray for their parents even the latter don't provide enough of what they ask from them. He urged parents to start nurturing their kids from the early stages of their life before they become teenagers, noting that this is the right time for the children to discover how to become great and successful men and women in life. He blamed parents for the high moral decadence among many Nigerian children, pointing out that his desire is to get the kids back to begin to read.

The speaker recalled his days as a young man that what he has become in life depended so much on reading, adding' the reading culture is not so good in Nigeria at the moment' In his response to men of the pen profession who thronged the National Theatre Lagos venue of the event, Secretary General CORA, Mr. Toyin Akinoso said that the programme was organized to raise literacy awareness in the country. His words ' It is about our own contribution in converting 150 million Nigerians into human capital. There is a difference between when one says Nigeria has 150 million people and a good number of that population is not properly educated. And if one is not literate and educated, one can hardly be prosperous'

Akinoso stated that unless a good number of the population is converted into an economy through proper education, Nigeria's economy would continue to remain prostrate, adding that it is important for the country to have events such as this across the geo-political zones where various segments of the arts would cater for different segment of the society.

The CORA scribe disclosed that CORA would start a new program entitled Fix it where kids would be taken through practical engineering with the help of experts such as mechanics. He observed that the current curriculum in many schools have never dreamt of such practical classes, nothing that ' a lot of graduates of science and applied science cannot fix generators at home. He raised hopes that CORA would invite facilitators to take these kids on how to fix machines on trial and error basis

The Committee for Relevant Arts (CORA) started out as a facilitator and advocacy group for the promotion and elevation of contemporary arts in Nigeria. It is a group that prides itself as an enabler, which helps to improve fine and visual arts, as well as the film industry. It also organizes the quarterly Arts Stampede where it assemble artists and critics to talk about things that relate to the development of the arts sector.

According to CORA, writing and literacy is major segment of the entire creative enterprise which cuts across movies, television, journalism, engineering, accountancy and many others. And the quality of writing depends on how much one has read, hence the program Lagos Books and Arts Festival, which also includes exhibition of books by publishers and authors of various shades and class.