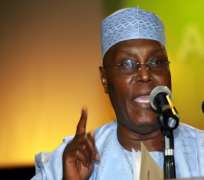 A statement by the organisation said the cause of the fire outbreak, which was noticed in the early hours of today (Wednesday) has not yet been established, as the Fire Service is yet to turn in a report on the incident.

There were no lives lost and no injury was recorded in the incident the statement said adding that computers, furniture and accessories were damaged in the fire which was confined to the first floor of the campaign headquarters at 1 Luanda Street, Wuse 11, Abuja.

The fire affected first floor of the campaign headquarters which houses the directorates of media and publicity, research and planning and special duties.

Former Vice President and presidential aspirant of the Peoples Democratic Party (PDP), Atiku Abubakar who visited the office to assess the incident thanked God for his mercy.He also thanked men of the Fire Service, Nigeria Police Force and staff of the campaign organisation for their prompt response.

The former Vice President directed that the renovation of the affected office be effected within 48 hours while staffs affected by the incident have been relocated to a temporary office within the complex pending the completion of the restoration work, the statement added.