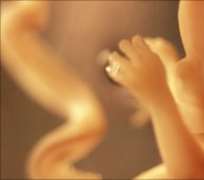 The placenta passes nutrients to the developing foetus

The placenta may play a key role in determining the gestation period of humans and other mammals, according to a new study.

The research links growth rates of mammals inside the womb to the structure of the placenta and the way it connects mother and baby.

This, as well as mammal size, may explain variations in gestation times.

Finger-like
The placenta plays a fundamental role in reproduction in mammals, transferring nutrients and oxygen from mother to foetus and removing waste from the foetus.

The structure of the placenta, however, varies enormously from species to species. This new study suggests these variations may play a role in the length of the pregnancy.

The researchers analysed 109 mammal species. What they found was the more complex and folded the placenta of a mammal, the shorter the gestation time appeared to be.

What they believe is happening is that more folded placentas are able to deliver more nutrients to the infant, spurring growth, and so reducing gestation times.

More complex placenta were found in mice, which have a gestation period of some three weeks, dogs (two months) and leopards (three months).

But humans and other primates such as baboons were seen to have simpler placentas where fewer nutrients were passing into the foetus, resulting in slower growth rates and longer gestation times.

“In humans, the placenta has simple finger-like branches with a relatively limited connection between the mother's tissues and those of the foetus,” said Dr Isabella Capellini of Durham University, the lead author on the study.

“Whereas in leopards, the placenta forms a complex web of interconnections that create a larger surface area for the exchange of nutrients.”

The study is published in the journal American Naturalist.

Mother vs baby
There are of course many other factors involved in gestation times, not least the size of the mammal, with larger mammals tending to have longer pregnancies.

Natural selection is also thought to determine at what stage of maturity an animal is born.

An animal like an antelope must be born ready to escape predators, while mice or squirrels are born with their eyes closed and without fur, and must be guarded further by their mothers.

But the role of the placenta may go some way to explaining why gestation times can vary between mammals of similar weight.

A European porcupine, which has a highly folded placenta, has a gestation of two months. A baboon, which will grow to a similar weight, has a simpler placenta, and a gestation length of six months.

Scientists have long seen the organ as a battleground where mother and child compete for nutrients.

The new research suggests that while the offspring of mice may be winning that war, in humans, there may be a more evenly balanced contest between mother and child.

“From the moment of conception, the physiologies of mother and baby are adapted to achieve slightly different goals in terms of how fast the baby grows.”

According to Professor E Wildman of Wayne State University in Detroit, US, who reviewed the study, the research provides strong evidence of the role placenta structure plays in gestation times.

He said the work showed that “the oven was being turned up a bit” in some mammals, with more nutrients leading to faster growth rates.