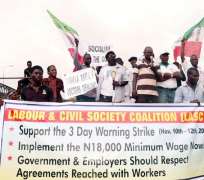 LAGOS, Nov 10, (THEWILL) - The business of the Lagos State Government was today paralysed as state principal officers of the Nigeria Labour Congress (NLC) stormed the state secretariat to effect the three-day warning strike, which commenced this morning.

The strike was part of the nationwide industrial action, which took off today to press home the workers’ demand for an N18, 000 minimum wage.

The warning strike, which crippled economic activities nationwide, was called off on Wednesday afternoon WAT.

Commercials banks and the Power Holding Company of Nigeria including private firms and enterprises in the state did not open for business. All the gates to the state secretariat were shut, an action that prevented Deputy Governor Adebisi Sarah Sosan, Commissioners, Special Advisers and Senior Special Assistants among others from gaining access to their offices. As at 7 am, comrades under unions affiliated to the NLC came to the secretariat, barred all gates to the secretariat and angrily turned back all public servants, who came around for special official assignments.

Only few persons including policemen and journalists were allowed into the state secretariat after proper screening. As part of the strike, the Power Holding Company of Nigeria (PHCN) cut off power supply to the entire secretariat as all the offices were thrown into darkness, including the Bagauda Kaltho Press Centre, where State House Correspondents usually convene after assignment to write and file in reports. Speaking during the operation, Secretary of the Lagos State Chapter of the Nigeria Civil Service Union, Comrade Olasunkanmi Olubade said about 95 percent of civil servants had complied with the strike as at 9:35 a.m.