HOW JONATHAN GOT LABOUR TO SHELVE STRIKE 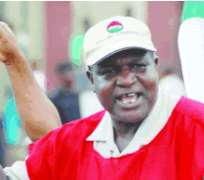 Omar
Details have emerged on how President Goodluck Jonathan succeeded in making the organised Labour to back down in the avowed struggle to force government to initiate the process of legislating the new N18, 000 National Minimum Wage into law.

The Nigeria Labour Congress (NLC) and the Trade Union Congress (TUC) had given the Federal Government a 14-day ultimatum, within which to commence the process of payment of the new wage. The labour leaders threatened fire and brimstone, warning that in the event government failed to take any action, at the end of the ultimatum, workers would embark on a three-day warning strike, after which the industrial action would be total, if government did not play ball.

To underscore its readiness for war, labour had set up a 12-man strike committee, headed by Promise Adewusi, deputy president of the NLC and national president of the Senior Staff Association of Nigerian Universities (SSANU). Labour had warned that the strike, scheduled to hold between November 10 and November 12, would be total.

However, the National Council of State, comprising the governors, National Assembly leaders, former and serving chief justices as well as former heads of state and presidents met to discuss the matter, at the end of which it set up a technical committee headed by Vice President Namadi Sambo, with five governors as members, to parley with Labour.

At the end of the meeting on Monday, the two parties could not agree or find a common ground. 'The strike is very much on course. We just ended a meeting with Vice President, Namadi Sambo. But unfortunately, nothing new was put on the table. So, we are fully mobilised for Wednesday,' Adewusi told Saturday Sun . He said that government team only made appeals instead of making offers.

As the stage was set for the action, it was gathered that President Jonathan called for a last minute meeting with the Labour. Before the parley with the president, National Assembly members, led by Senator Ake, had made a spirited effort at making the Labour change its mind but all to no avail. Having seen that the unionists' mind was made up, the federal lawmakers then urged the workers' leaders to reduce the warning strike to one day.

The meeting with President Jonathan was fixed for Tuesday night. Ahead of the meeting, labour leaders had made strategic arrangement for the strike to kick off on Wednesday. They had deployed their foot soldiers to coordinate the action across the federation.

At the meeting, Saturday Sun gathered that the president told the labour leaders to abort the strike. Sources said that he explained to the labour leaders the position of government not to deny workers their dues. He was said to have told the unionists how he, on the May Day, without prompting, announced a pay rise, which should be completed and paid within three months.

President Jonathan stated further that the pay rise for which the least paid federal workers now earns N17, 100, was 46 per cent increase over what they were earning before.

'Now, if the new minimum wage comes into force, it will only take me N900 to add to it. Is it the N900 that will be difficult for government to pay?' the president was said to have asked rhetorically.

He was also said to have told them that if it were to be just pay rise, all he needed was just to include it in the budget and it will be paid. However, he added that a national minimum wage ought to be legislated on to be binding on states and the private sector.

Saturday Sun gathered that labour leaders expressed concern over the conduct of governors, most of who have denied knowing or receiving any memo concerning the new wage proposal, as recommended by the Justice Alfa Belgore-led tripartite committee of government, labour and employers.

Convinced of the points made by the president, the labour leaders agreed to sheathe the sword but said that it would take more than 24 hours to demobilise the foot soldiers. Also, they said that the decision to suspend the action would have to be taken by the National Executive Council of both congresses, which actually voted in favour of the strike, in the first place.

This much was confirmed by the General Secretary of the NLC, John Odah, who told newsmen that some state governments planned to stall the implementation of the new wage, despite their involvement in the negotiation process.

'So, in the process of the tripartite negotiation, we made sure we carried everybody along, both government and private sector, and we are happy that the Nigeria Employers Consultative Association (NECA), through a paid advert, stated that they participated and expect government to do everything lawful by ensuring that the minimum wage is implemented.

'Even though we know there are people in the private sector who do not want it, fearing that the minimum wage will affect the outrageous profit they are making, we are hopeful that at the end of this process, the national council of state will have a situation where the state governors will not be the clog in the wheel of progress.

'We told the president that we have heard what he said and that we have to take it to the National Executive Council and thereafter we will get back to him.'