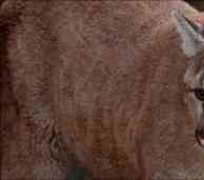 A mountain lion found it was no match for a Jack Russell terrier which trapped it up a tree on a farm in the US state of South Dakota.

He discovered the 150lb (68kg) male lion, also known as a cougar, clinging to the top of a tree with 17lb (8kg) terrier Jack at the bottom.

Mr Strenge, helped by his dog, chased the mountain lion and shot it dead.

“He trees cats all the time,” Mr Strenge told The Argus Leader newspaper. “I suppose he figured it was just a cat.”

Professor Jonathan Jenks, an expert on cougar migration, said hunters usually needed two or three hounds to chase a lion up a tree.

He said the cougar was probably not hungry enough to attack Jack.

“It very well could have lost a territory and decided to take off from the Black Hills and head this way,” he told The Argus Leader.

Arden Petersen, of the South Dakota Game, Fish and Parks department, told The Madison Daily Leader that no charges would be filed for shooting the animal.

People in South Dakota have the right to kill mountain lions which they feel are a threat to themselves, their livestock or their pets.

The lion was taken to South Dakota State University, where it will be studied.

It is not the first time a potentially dangerous north American wild animal has been brought to heel by a family pet.

In 2006, a ginger cat – also called Jack – chased a black bear up a tree in West Milford, New Jersey.

When the bear eventually climbed down, Jack the cat chased it up another tree.

The bear only escaped when Jack's owner called him into the house.