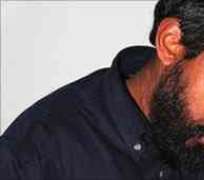 Mr Jayantha fled Sri Lanka after he was abducted and assaulted

A Sri Lankan journalist, a Russian lawyer and a Gabonese activist have been named as joint winners of a global award for integrity.

Gregory Ngbwa Minsta had inspired people to “fight against impunity”.

'I had to leave'
Poddala Jayantha was the general secretary of the Sri Lanka Working Journalists Association until last year.

He campaigned for media freedom and was seen by government supporters as an opponent of the authorities.

In June last year he received head and leg injuries in an attack near his home in Colombo. He currently lives in the United States.

“I am happy that I could fight against corruption and campaign for press freedom while working for the state media,” he told BBC Sinhala after the awards announcement. “But yes I had to leave the country as a result.”

Sri Lanka is still among the most dangerous places for independent journalists, according to press freedom watchdog Reporters Without Borders (RSF).

In its latest press freedom index, Sri Lanka is rated 158 out of 178 countries listed.

Russian lawyer Sergei Magnitsky died in a Moscow remand prison in November 2009 while awaiting trial for tax evasion in a case connected to a US investment management firm.

In court, Mr Magnitsky said he was the victim of a vendetta for testifying against a senior police official in a fraud case.

He is said to have died of pancreatitis, a medical condition he reportedly developed in prison after being kept in squalid conditions.

“Sergei Magnitsky did what to most people seems impossible: he battled as a lone individual against the power of an entire state,” Transparency said.

The organisation commended Gregory Ngbwa Mintsa for helping it bring legal action in France resulting in an investigation into how three African leaders “were able to acquire luxury properties and goods in France”.

“Despite threats, imprisonment and a freeze on his salary, Mintsa refused to drop the case,” Transparency said.