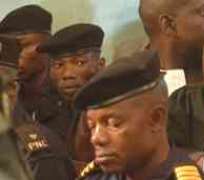 The trial has started of eight officers charged with the murder of prominent human rights activist in the Democratic Republic of Congo.

They are accused of killing Floribert Chebeya, head of the charity Voice of the Voiceless, in June.

His body was found bound and gagged in the back of his car after being called to a meeting with police chief John Numbi, which did not take place.

Gen Numbi has been suspended but does not face any charges.

The BBC's Thomas Hubert at the court in the capital, Kinshasa, says Gen Numbi was unexpectedly presented to the court as a witness.

About 300 people have turned up for the trial, our reporter says.

Impunity fears
The officers all face charges of abduction, assassination, terrorism, conspiracy and mislaying of weapons.

Three of the accused are on the run and will be tried in absentia.

A lawyer representing Voice of the Voiceless said the case should have been heard before a high military court.

“There is no judge with a rank equal to his [Gen Numbi], so it was the head of state's responsibility to promote magistrates so that they could match his rank and try him, otherwise it is just the continuation of impunity,” Peter Ngomo told the BBC.

On the day he disappeared, Mr Chebeya sent a text message to his wife saying that he was at the police headquarters for the meeting, but was not heard from again.

Both the police and Voice of the Voiceless have confirmed that the meeting with Gen Numbi did not take place.

Our reporter says the trial will probably last for several months, especially if Mr Chebeya's supporters put up a legal fight to bring Gen Numbi before the court, as they have promised.