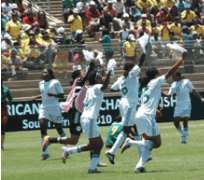 Super Falcons celebrate their 5-1 win over the Lionnesses of Cameroon at the Sinaba Stadium, South Africa

Perpetua Nkwocha's second hat-trick of the tournament propelled Nigeria to a 5-1 win over Cameroon, thus qualifing Falcons for the final of the African Women's Championship. The result also means the Super Falcons are qualified to play in the finals of the 2011 FIFA Women's World Cup.

The other goals came from Helen Ukaonu and Ugochi Oparanozie with Jeannette Ngock bagging her side's consolation. Cameroon had only picked up merely one point from Nigeria in six meetings at the African Women Championships. It was a trend that Cameroon's coach, Enow Ngachu, was determined to reverse, especially with hope of a place in the World Cup finals at stake.

It was no surprise then to see the Indomitable Lionesses start at a high tempo, but not before Nigeria had issued a statement of intent in the opening 40 seconds.

Stella Mbachu sprinted down the right from kick-off, and delivered a low cross that Nkwocha just failed to direct in with her head.

Warning taken, Cameroon went down the other end. Gabrielle Onguene was connected by Onome Ebi on the edge of the box, and Christine Manie hit the side netting from the free-kick. Helen Ukaonu then blasted a free-kick just over, after Cathy Bou hacked Oparanozie on the edge of the box for her first yellow card of the game.

The game was shaping up to be one of those epic contests and Nigeria-based Bayelsa Queens lady, Bella Francois, tested Nigeria's goalkeeper, Precious Dede, with a long distance shot.

Ebere Orji answered for Nigeria, heading against the right stick from Nkwocha's delivery. Bou was having problems keeping track of the wily Nigerian forwards, and it proved to be her and Cameroon's undoing.

She picked up her second booking of the game after just 27 minutes for a clumsy tackle on Mbachu and Cameroon's team was short by one.

It took just seven minutes for Nigeria to press home the advantage. Ukaonu delivered a corner kick that evaded everyone, including three Cameroonians on the line, for the opening goal. A second was to follow soon after. Nkwocha freed Mbachu down the right side with the Cameroon defence playing a high line. The Rivers Angels' winger placed her cross bang on Oparanozie's head, who rose unmarked to plant in the second of the game.

Cameroon players were not giving up, and halved the deficit within two minutes of the restart. Ulunma Jerome got in Dede's way as a free-kick came sailing in. The ball bounced off her head and into the path of Jeannette Ngock, who could not miss with her header from two yards.

With 20 minutes to go, Ohale almost gave Cameroon a way back into the game for the second time. She was caught in possession close to the box, and the dangerous Gabrielle Onguene was preparing to fire when Ulunma Jerome came to the rescue.

Five minutes later, Nkwocha claimed her second of the game, and ninth of the tournament. Oparanozie held the ball, then looped in a harmless looking ball into the box. Two defenders went for the ball, completely made a mess of themselves, and Nkwocha squeezed in a low volley. She completed the scoring by winning and taking an 81st minute penalty, skipping past two challenges before getting clipped from behind by Deborah Enganamouit. The goalkeeper went the right way, but the kick had hit the net.

…To meet E/Guinea in final
Equatorial Guinea also booked her place in the final of the 2010 African Women Championship on Thursday, after sending out the host, South Africa, in the semi-final and in doing so joined Nigeria to represent the continent at the FIFA Women World Cup next year.

Controversy continues to dog the Guinea side. After an earlier protest from Cameroon that they were fielding ineligible players, something CAF dismissed 'until a full investigation could be launched', Ghana has now said that the Guinean side included menin her team! Two Black Queens players, Diana Ankomah and Captain Florence Okoe, claimed Equatorial Guinea used three men during their final Group B game on Monday which Ghana lost 3-1 to exit the competition.

CAF is refusing to comment on the issue as this is the second tournament in a row that the Guineans have been accused of gender cheating. Salimata Simpore, Bilguisa Simpore and team captain Genoveva Ayonmang, were in 2008 suspected to be boys. Black Queens' team captain Florence Okoe said no one can make her yield in her belief that Salimata Simpore was “a boy playing in a girls game'.

“It is not as if we are throwing sour grapes, just because we have lost. Rather, this is the fact and it is up to the organisers to do something about this. It is not good for African women football,” she said.