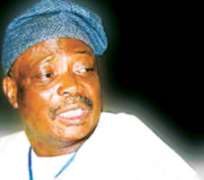 A pro-second term for Oyo State Governor Adebayo Alao-Akala has asked the Olubadan of Ibadanland, Oba Samuel Odulana Odugade 1, to call some Ibadan politicians involved in last Friday's political rally in Ogbomoso, which turned bloody to order, to avoid setting the state on fire.

The rally, organized by chieftains of a faction of the Peoples Democratic Party (PDP) in conjunction with some Ogbomoso politicians, was rocked by violence when armed youths believed to be loyal to the governor clashed with supporters of the faction, who reportedly also stormed the town with political thugs.

The Destiny Group, at a press conference, addressed in Ibadan by its Director of Media and Strategy, Adesina Akinpelu, said: 'It was unfortunate that members of the Olubadan-in-Council like Senator Lekan Balogun and former Governor Rashidi Ladoja encouraged such an act of thuggery.'

Akinpelu noted that it was unfortunate that both Ladoja and Balogun, who were both high chiefs in Ibadanland, could storm Ogbomoso with thugs, arms and ammunition, all in the name of politics.

Ladoja, Balogun, Folarin, Sarafadeen Alli (former secretary to the state government under Ladoja), Alhaji Yunus Akintunde (chairman Implementation Committee of the PDP), Fatai Buhari (former House of Representatives member from Ogbomoso), and other factional leaders had taken the anti-Akala campaign rally to Ogbomoso, having held similar ones in Oyo and Ibadan.

The group accused the politicians of arming and sponsoring the thugs to invade the town and overawe the residents, describing the action as provocative. The group wondered why Folarin suddenly became a political associate of former Governor Ladoja having allegedly co-financed the illegal impeachment of the former governor, spearheaded by thgew late Chief Lamidi Adedibu.

According to Akinpelu, the party leaders resorted to violence in their bid to get political relevance; 'having failed to perform up to the expectation of the people of their constituencies.'