A legend’s son rises to his own acclaim 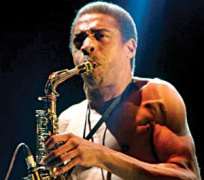 Music Nov 7, 2010 By Ogbonna Amadi, Entertainment Editor with Agency report
Femi Kuti speaks like one of his many saxophone solos hands aflutter, voice rising quickly before a steep fall and hitting disparate pitches.

“I already believe we are already in a state of anarchy. But Nigerians are very resilient and are always praying and we want Jesus Christ to come down from heaven and change Nigeria for us. We are ready to wait,” the Afrobeat musician said.

He adds: “It's boiling, slowly but surely. And if the government doesn't quickly change … violence could start at any time.”

The driving rhythms of Kuti's message follow that of his famous father, Fela Anikulapo-Kuti, who created the synthesis of pop and jazz fueling Afrobeat and served as one of the staunchest critics of military rule in oil-rich Nigeria. Now the focus of a Broadway musical, Fela's mysticism and sexual exploits are reaching a new audience.

But Femi Kuti, 48, learned from the excesses of his flawed rebel father. A two-time Grammy nominee, Kuti found his own voice amid the growing noise in a Nigeria where freedom of speech exists like never before in his lifetime as well as a sustained commercial and worldwide following.

“I know when to be light; I know when to be hard,” he said in a recent interview.
The delicate balance of commercial success under the heading of world music helps Kuti and sister Yeni Kuti to keep open the New Afrika Shrine, a relocated version of the Shrine that their father lived and played in.

The original Shrine, raided repeatedly by police and later the military during Fela's life, burned to the ground.

“A handful of unnatural, unbalanced people are running the world,” Fela once said, quoted by biographer Carlos Moore. He recounted seeing a rebel leader board a first_class flight from Berlin to Lagos in 1978, picked up by Mercedes Benz sedans at the other end.

“The leaders of the African freedom struggle will always want the struggle to continue. For them, it means travelling around on first-class tickets and being given VIP treatment wherever they go,” he said.

Much of that rage focused on Olusegun Obasanjo, then a military dictator and later an elected president who came from the same hometown as Fela's family. After Fela's mother died following a beating by soldiers, Fela carried her casket to the presidential estate in Lagos. It served a bold protest in a country cowed largely into silence by military rule.

“At the time of my father, there was nothing like human rights groups in Nigeria,” Femi Kuti recounted recently while backstage at the new Shrine. “He on his own solely fought the military dictators at that time and the civilians that they passed power through in the '70s and '80s.”

But life wasn't easy for Femi growing up. When the military arrested his father and sent him to prison before a 1984 U.S. tour, Femi took over the band and displayed an innate business sense that kept the music alive, said Sola Olorunyomi, a Fela biographer and professor at the University of Ibadan in Nigeria.

Fela died in 1997 of complications brought on by AIDS, a disease that sapped his energy to perform in his last years and one he dismissed in song, calling protected sex “unnatural.”

Today, a giant red placard at the Shrine warns concertgoers that “AIDS is real” and Femi Kuti has appeared in awareness advertising.

Kuti continues to bring a business mentality to his music. He acknowledges some songs critical of the nation's supposedly democratically-elected government won't get airplay on Nigerian radio stations that are leery of losing their licences, so he fashions apolitical tracks as well. He even offered his voice as a DJ on a funk radio station in the violent video game franchise “Grand Theft Auto IV.”

His songs offer a pop-like, frenetic pacing at times, such as the driving backbeat of love story in “Bang Bang Bang.” But others, like “Shotan,” carry an angry political message inside the pulsing rhythm: “Say the government of Obasanjo, go carry all of us go for hell.”