WHY MEN CHEAT ON THEIR WIVES –BASKET MOUTH 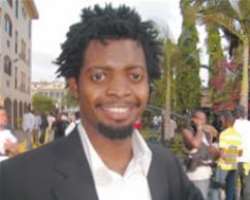 This one's for the female folk. Are you intelligent, God fearing, beautiful, funny and above all sexy? You could be the right woman for A-list comedian, Basket Mouth (Bright Okpocha).
Last week, Basket Mouth let Sunday Sun into his world as he disclosed the five qualities that a woman must possess in order to unlock his heart.

According to him, intelligence, fear for God, beauty, humour and being sexy are the five basic qualities but the most important one was sex appeal.

He rationalized thus: When a woman is sexy, her hubby would have something to always run back home to. Hear him: “I am not particular about the complexion of my woman. I am more particular about what she has upstairs. I have five criteria for judging my woman. She must be intelligent, God fearing, beautiful, funny and above all, sexy! The reason why men cheat on their wives is that they don't find their wives sexy enough. But if she's sexy, I will always have something to run back home to.”
However, he admitted to being in a relationship: “I have a girlfriend I am in love with. We have been together for two or three years. Maybe, we might get married next year.”

Burden of stardom
According to the comedian, being a star was not all roses. It has its thorns as well. One thing he still misses is 'Mama Put.': “It has restricted me from being myself. It's had its negatives and positives. Stardom has brought a lot of favours and opened a lot of doors but at the same time, it has messed my life style up! Right now I can't do those things I used to do anymore. I can't eat my Amala again at 'Mama Put' though I still sneak out sometimes for the experience.”

Back in the day…
“I never found comedy but comedy found me in secondary school. “It just happened that I ended up a comedian. I never planned it. I was just the funny boy in class back in secondary school. During free period, we used to do what we called 'wording,' sparring sessions where we hurled jokes at one another. Then they paid me N5 to come and 'word' people. That was how I started earning money from comedy.

He said that he was so good that one day somebody christened him 'Basket Mouth,' after watching him demolish another opponent in a 'wording' session and before he knew it the name stuck.
He said that it, was passion and not the love of money that propelled him into comedy: “My style of comedy is a blend of spontaneous and realistic comedy. Ali Baba helped me define it. I have been in the game professionally for five years and I'll tell you what, If I wasn't making money, I probably wouldn't be doing it, However, I did not come into it because I wanted to make money. I came into it because I had a passion for making people happy. I was doing what I loved doing and the money came along. My jokes are a reflection of my life. I live my life on stage. It's about me.' I get inspiration for my jokes from my environment. I observe a lot. I talk less and listen to get stuff.”

Today, he has broken ranks with poverty but back in the day, young Basket Mouth was born in Nigeria's most notorious and Africa's largest ghetto, Ajegunle Lagos.
“I was not born with a silver spoon. In fact, I wasn't born with a spoon at all. I was born in Ajegunle but grew up in another ghetto, Kirikiri. I won't say that I was an Aje kpako back then because there was a middle class but today, it is either you are rich or poor. I guess, by today's standards, we were poor.”

Greatest challenge
“The greatest challenge has been staying on top and on point. A lot of people expect a lot from me. Maintaining the position is the most important thing because a lot of people want to see you fall. Most people like the way they see Michael Jackson in crisis bugged down with so many scandals. I have read a lot of cooked-up stories about me in the media. I try to avoid controversy and I remain positive. That is the most challenging for me. It is sad those moments when people come up with untrue stories about me in the media.”

Homosexual basher
If there is one thing that turns Basket Mouth off, it's homosexuals. They were the butt of his jokes at this year's edition of Night of A Thousand Laughs. However, he does not see himself as a homosexual basher.

“I am not a homosexual basher. I want to call myself the guy who is always on point. I believe in what the bible says that God created Adam and he was lonely, so God gave him Eve. He did not give Adam a Joshua or Abraham. That means that God is aware of what we need. I hate homosexuality, it is actually killing the whole world.”

Man of style
If there is one thing that sets him apart from his colleagues, it is his carriage and style. He spots dread locks but insists that he does not smoke marijuana, a favorite recreational drug among artistes: “I don't smoke marijuana. My hair style is not dread-locks like people think. It is known as Chronic. Dreadlocks are long but mine is short. I saw it on a Western comedian and I liked it. It happened I was abroad and I couldn't cut my hair so a friend said how far? This looks great on you. How about going Chronic? So I tried it out and every body liked it. I decided to make it a trade mark. I am still building on my image but I believe that I have done well.

“I don't wear names. What I am wearing right n is made by a Nigerian. I believe that what you wear reveals your mood so I try as much as possible to be happy I were stuff that makes me feel good. Even down to my perfumes I don't wear names. But I guess I love Gucci.”