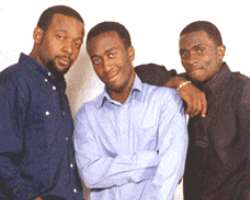 Are you a fan of Styl Plus? Have you been waiting for something sizzling and fresh from the trio? You need not wait any longer.

Contrary to rumours that they have all gone their separate ways, following irreconcilable differences, unconfirmed reports indicate that Styl Plus has hooked up with Ahbu Ventures, the marketer behind the success of Faze's (Chibuzor Orji) sophomore album, which has metamorphosed into a run-away success.

According to insiders, the deal, worth millions, will see the stars hooking up with the frontline marketer for their third album.
Insiders say the youths are so excited and have completed work on the album, which took over three months to produce in Abuja.

Another insider, who spoke on grounds of anonymity, said they are set to put pen to paper any time from now. Word also has it that the album, a 10-tracker, would redefine the stars as R&B artistes.
Attempts to reach the boss of Ahbu Ventures or the trio for comment proved abortive.
However, 'Showbiznow' will keep y'all posted as events unfold