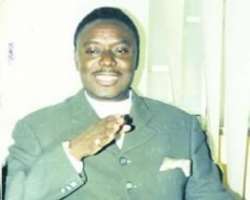 Though a foremost pop musician, a high-profile pastor, this suave and eloquent Man of God has also been a presidential candidate twice.
Meet Chris Oghenebrorie Okotie, Senior Pastor of the famous Household of God, a church in Oregun, Ikeja, Lagos. He is indubitably careful and passionate with words. For instance, when he is using it as medium to entertain his flock via soul-lifting lyrical composition, he does it on conviction and with a passion. On the other hand, when he stands in front of the congregation to deliver his weekly sermons, he is always prepared and passionate too.

Recently, the amiable Pastor who is looking up to hitting fifty years June 16, next year; spoke on his philosophy, his conception of death, the role of sex amongst, his death wish and more.
Below are excerpts of the interview with the Delta-State born preacher, politician, dancer, scholar and writer:

Who is Pastor Chris Okotie?
“I think am just a man who believes in the word of God; who trusts in the word of God; who is filled with the spirit of God and doing the work that the Lord has committed into my hands. I am a Nigerian and I love my country, and I'm completely passionate about this country. I want to do the right thing and be a blessing to my generation and convey the revelation of the scriptures to God's people basically.”

Christian's penchant for Sunday worship
Okotie's response on whether he subscribes to Christian's traditional Sunday worship was in the affirmative. His defence: “Because our saviour, Jesus Christ, rose on a Sunday. In the Jewish dispensation, it was a Sabbath day; but, when our messiah died and rose again on the 3rd day, he established a new dispensation. Since that day, the day of rest is no longer the Jewish Passover but Christ has become our Passover.
“And that is why we now worship on that day,” he adds, “But that is not to say that we cannot worship on other days. But it (Sunday worship) is only symbolic.”

Sex for pleasure?
Considering Okotie's deep knowledge of the scriptures, Sunday Sun asked him whether sex is for pleasure. His reply: “Sex is not for pleasure within a certain definition, in the sense that sex is not something that anybody should indulge in because they want to gratify certain goal. Sex is restricted to the marital institution. But within the marital institution, it is pleasurable. God created sex for marital couple to enjoy and it is also the process of procreation. So, it's not just to give birth, it is with the highest level of intimacy.
“The word of God says that when a man and a woman come together, they form one flesh. So… the unity of marriage is consummated in sexual intercourse at the highest point of that unity.”

Okotie's philosophy
What is Okotie's philosophy of life? His response: “My philosophy is biblically fixed. The word comes from the Greek word that speaks of wisdom as a pattern or a part that you walk. Everything that I am today in the concept of life is in all that I have received from reading the Bible.
So, my philosophy is really based on the scriptures, and that is the fact that there is God who is the maker of all things; who is the sovereign God; who decides what He wants. Since He is the creator and we are His creatures, we can never fulfill our potential on earth until we hook up to the creator. And then, He impacts the necessary wisdom to us to enable us fulfill our mission on earth; and that our paths are guided by that great creator: The one who became a man for us. I know Him as Jesus Christ and he is still so.
Whatever the Bible has to say concerning Christ is what I believe.

Okotie on death
Hear him on the mystery of death: “In the Bible, death is defined on two levels. There is physical death and there is spiritual death - both of them speak of separation.
In spiritual death, your spirit is separated from the spirit of God. In physical death, your spirit is separated from your body. So, death really is, about the movement of the spirit-man because man is a spirit. The direction in which he walks determines whether he is alive or he is dead. For example, if he walks away from God, he dies spiritually; if he walks towards God, he lives spiritually. Now, that is in the spirit.

So, if he walks away from God, he dies spiritually. So, it's all about the spirit of man. As if stimulated by the topic, he goes on to explain: “The word of God teaches that we all died in Adam. All men died when Adam sinned against God in the Garden of Eden; because as the ultimate patriarch of mankind, the progenitor of mankind, He impacts death into all of us his children because it is hereditary. That's why we all died-not because we did anything; but because of our pre-parent-Adam and Even. But when we come to meet Jesus, then we have life because he is the last Adam. So Christ in us, is now hope of the glory that we expect of God.

Now, when you are a child of God and you are a believer, your concept of death changes because death does not have the finality that it would have if you were outside of Christ.
“So now, if you are a born-again Christian, death is like a change of cloth: you just walk into your tomb and you are robed all over again for another existence. So for me as a Christian, I'm no longer scarred of death. I used to be… but, when I became a child of God, I was delivered from the power of death. So, now, 'am completely fearless because I know that Jesus died in the tomb for me; and now I don't have to sleep for long. So if I shut my eyes on earth, I open them in heaven. It's as simple as that.

Wish after death
Talking about what he would want inscribed on his tomb as epitaph when he bids the world good bye, Okotie takes a deep breath and replies:
“Here lies the body of a man who walked with God; walked away from his body and walked with the spirit of God; and, is walking right now in that spirit.”