MOTHER OF RAPE VICTIM CRIES OUT FOR JUSTICE 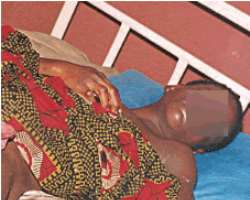 Victim
The mother of a 13-year-old girl, in Ajangbadi, Lagos suburb, who was allegedly raped and tortured by a co-tenant, has cried out for justice.

She has particularly appealed to the wife of the state governor, Mrs. Abimbola Fashola and other concerned mothers to assist in ensuring that the suspect is prosecuted.

Cheta (other names withheld) was allegedly raped and a deep cut inflicted on her private part, which also affected her intestine.

According to the distraught mother, some of her daughter's intestine were seen gushing out from her vagina after the dastardly act. A medical doctor in a private hospital pushed the intestines back and stitched the private part, to stop excessive bleeding which according to her, lasted for two days.

The victim, who spoke of her ordeal in the hands of one the suspect, Chukwuemeka (other names withheld), narrated how she went to dispose of refuse, after her aunty she was living with had gone out before the unfortunate incident.

According to her, she was on her way to the refuse dump site when the suspect called her.

'As a co-tenant I regarded as an elder brother, I did not suspect he would hurt me,' she said

According to her, Emmy, as the suspect is fondly called, in the area, lured her into the flat where he lives quickly locked up the door.

'He pushed me down and used one of his hands to cover my mouth and held me to the ground.' He succeeded in removing my clothes but I vowed not to allow him have his way. I started struggling with him but he kept warning to kill me, if I did not succumb, but I resisted,' she said.

The victim, who sobbed as she spoke to Daily Sun, continued: 'He has long nails. So, he used them to tear my vagina. The nails penetrated inside me and it was as if he was using sharp razor blade to cut my private part. He did not have pity on me even when blood was gushing out from my vagina. 'The man was using his fingers as if he was frantically searching for a missing object. I almost died. And when he realised the magnitude of the damage he had done to me, he stood up.

It was when I stood up that I noticed that my intestine was gushing out. I thought I was going to die but I managed to go home to narrate my ordeal to people before I would die.' The victim's mother, a single parent, told Daily Sun that she lived in Ikotun area of the metropolis, while her daughter lived with her younger sister at Ajamgbadi. She told how she was phoned and informed that her daughter had been rushed to a private hospital, after her encounter with the victim.

The angry woman, who simply identified herself as Madam Ify said she was devastated, when she saw the condition of her daughter. ' As a single mother, I knew that my world has collapsed. I tried to imagine the harrowing experience my daughter went through and the excruciating pains she went through during the attack. So, I rushed to the Ajamgbadi police station, where I reported the matter,' she said.

'So, I was blackmailed to withdraw the case from the court and wrote an undertaking not to pursue the case in court any longer.'

She said even after writing the undertaking, her daughter was still abandoned at the hospital with a medical bill of N45,000, hanging on her neck. She said each time she went to Chukwuemeka's family to request for the payment of the hospital bill, they threatened her.

She said her daughter had been having psychological trauma and abdominal pains since the attack on her by Chukwuemeka. 'I am a single parent. I have no money to follow up the case. I beg Mrs. Abimbola Fashola, the Deputy Governor of Lagos state, Princess. Sarah Sosan and all concerned women to fight this battle for my daughter. It is a war against female intimidation and inhumanity to womenfolk,' she said.