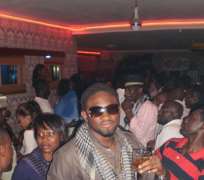 The winner of Big Brother Africa All Stars, Uti Nwachukwu of Nigeria was back in Nigeria few days ago with a carnival-like welcome-back party. In fact a lot of organisations, including his home state governor of Delta State, Gov. Uduaghan has been out-doing themselves to host Him.

However, 411daily gathered on good authority that Dr. Mike Adenuga (Jnr), Chairman and owner of Nigeria's leading telecommunications company, Globacom, trading as glo, is going to sign him on as an ambassador in the next few days.

According to information at our disposal, Uti has already been reached by Adenuga himself and he has tentatively agreed to become a Glo ambassador. Sources say the contract is worth in the neigbourhood of $700 000USD (N105 000 000).

Uti has already attended an event held by Globacom where he got to meet other Globacom ambassadors like Ramsey Nouah, Kate Henshaw, Rita Dominic, Desomnd Elliot and Ini Edo. The contract we hear, is going to be announced in the coming weeks, where Uti will be presented to Nigerians through a press conference as the latest Globacom ambassador.
Globacom recently signed on Nigeria's music sensation, PSquare for over $1.5 million USD.

Meanwhile, Uti was stranded for several minutes on a lift conveying him to the Minister for Information's office (Dora Akinyuli) somewhere on the Eight floor, Uti was accompanied by some top management staff of Mnet and Dstv when the lift stopped halfway and trapping them in it.