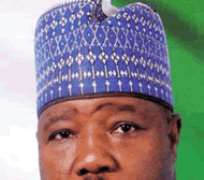 Senator Kaka Mala Yale, representing Borno Central has declared that he would voluntarily quit his National Assembly seat, if Borno State Governor, Ali Modu Sheriff announces his intention to return to the Senate in the 2011 polls.

Yale, in an interview with Daily Sun said he would not wish to challenge Sheriff in an election, as he acknowledged that the Governor 'is the ANPP leader in the State and has done a lot to improve the party.'

Sheriff was in the Red Chamber from 1999 to 2003 before he contested and won the governorship seat in 2003. His posters, now adorn prominent places in the state capital indicating his plan to return to the Senate.

But Yale remains unruffled, as he told Daily Sun that only God gives power and as such, he did not see politics 'as do-or-die affairs.'

His words: 'Some people said Governor Ali Modu Sheriff wants to go back to the Senate next year. He hasn't told me about it or declared to the people and our supporters but if it is true, I will step down immediately for him. He was in the Senate before and even became the Minority Leader. He is the leader of our party in the state and a leader at the national level; he did everything for the party and there is no reason I shouldn't step down for him as far as the Borno Central senatorial seat is concerned.'

He spoke on other sundry matters:
On his foundation
I can't precisely tell you how far I have gone on the Foundation but I know many people have benefited from our humble efforts. The basic things we've done so far are in three key areas which include, education, health and environment.

I cannot give you the exact number of those who have benefited from our scholarship package/programme up to the university level particularly those who can not ordinarily afford the cost of education these days.  The state government has expended huge resources in the education sector but despite this, there are a lot of things to be done and we are striving to contribute our quota especially for the underprivileged ones.

One area which is dear to my heart is the Shangaya Islamic system. We have been assisting the pupils and encouraging that the system be ran along with Western education and I must tell you that we are succeeding in this regard.

Apart from scholarship, we have been assisting in terms of facilities, classrooms, teaching and learning aids, capacity building for teachers among others. For tertiary institutions, we intervened but it depends on the need of the students. For the widows and orphans, we started sometimes ago with economic empowerment package. We gave them non-refundable fund. The idea behind it is for them to be dependent economically so that they can do small or petty business to earn a living instead of perpetually begging.

We even got the National Directorate of Employment (NDE) to train some of them in various skills. So the money was given to them through their organizations or associations and then they pay to their organizations, not me. It is like a revolving loan and every member of the organization will benefit. By the grace of God, the scheme will continue even after I'm out of the National Assembly or politics because the Foundation is not a personal property or estate. It is a public property and anybody who is interested can assist in terms of funding or whatever. So it will not die even if I'm out of politics.

CPC threat to ANPP
Which threat? I have heard or read people talking about ANPP facing great challenge from Congress for Progressive Change in 2011 polls but I do not see any challenge so far.

It is true that the most of the CPC membership are from ANPP and that's why I'm still sure they will come back to the ANPP fold. In Borno, the ANPP is the strongest, biggest party and I am happy it is giving impressive performance through service delivery in the state. I mean dividends of democracy in terms of infrastructural development.

For me, I don't think CPC is a threat to us. In 2003 when the Alliance for Democracy controlled the government and was very strong, the ANPP won but now the CPC is even yet to be known by the people. They are still very new and young in the political terrain of our nation and our country. Therefore, they need to be accepted by the people first before you can talk about challenging any party.

Sheriff and Borno Senatorial seat
You may be correct to say most of my colleagues in the National Assembly from my state are interested in going back to their seats in 2011 polls but I must also add that none of them has told me or publicly declared his intention, So, it is still a speculation as far as I am concerned. I also understand that some people said Governor  Ali Modu Sheriff wants to go back to the Senate next year. He hasn't said that or declared to the people and our supporters but if it true, I will step down immediately for him.

He was in the Senate before and even became the Minority Leader. He is the leader of our party in the state and a leader at the national level; he did everything for the party and there is no reason I shouldn't step down for him as far as the Borno Central senatorial seat is concerned.

For me, I have always believed that position is not a do- or- die affair and I have said it times without number that I will even be comfortable to stay in my area attending to the need of my people. So what is the big deal about being at the Senate perpetually? Only God gives power and who can tell whether we will be alive to participate in the elections. All these things are possible if God approves. If I don't go to the Senate does it mean I will retire from active politics? No, but God will decide where I will go after this legislative assignment.

ANPP deserves Presidency
I strongly believe ANPP will make a difference, if given the opportunity to rule this country. The PDP has been in power for about 12 years now but there is no appreciable development in the quality of lives of Nigerians. In essence, they've not performed as they ought to do.

But with ANPP, the situation would have been otherwise. PDP is full of people who are interested in their personal development at the expenses of Nigeria and Nigerians. So ANPP could have done wonderfully well if it was in power. But then, it is left to Nigerian voters to decide and they have the choice of either to live in peace, happiness and progress or continue to live in perpetual hunger, poverty and diseases as long as PDP remains in power.

INEC and 2011 polls
Generally people say the INEC man is a man of integrity, principle and capable but the problem of election in this country is not that of the leadership of the electoral body.

The chairman cannot do everything because a tree does not make a forest. He needs the support and cooperation of his staff and Nigerians as well. If we don't give him our supports and encouragement he cannot perform no matter how he tries.

So it is a political crime collectively perpetrated at every stage of election by all these people. We really need a change of heart, attitude to how we do things or conduct our affairs including elections in this country. By so doing, I believe we shall conduct credible, free and fair poll.

On the 50th independence anniversary, I think it is an avenue for our leaders to rededicate themselves to the services of this nation. Fifty years is not a small period in the lives of an individual or a nation.

It is even an achievement for us to live together for fifty years because some of the things that happened to us in the past would have divided other countries. It took the United States a long time to produce a president after their civil war but here in Nigeria, we are fighting ourselves after about twelve years of return to civil rule over where the president of the nation should come from.

This to me is part of our problem and it shameful. We shouldn't reduce the presidency of this country to ethnic or religious thing and I think some people just derive pleasure in using this to cause conflict so that they can benefit from it. We should be talking about the personality of the occupant of the office, his or her integrity, his record. Is he credible and patriotic and is he or she a good man or woman?  But I believe we shall rise above ethnic or religious sentiment in our politics one day; this is my prayer for our country.