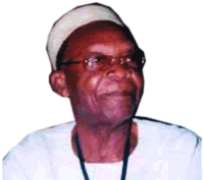 Also, he has dared the ruling People Democratic Party (PDP) to deny Jonathan its presidential flag in next year's general election and risk humiliating defeat.

Speaking in an exclusive interview with Daily Sun, Chief Achuzie expressed surprise that any Igbo man would raise his voice against the declaration by Ohaneze's President, Chief Ralph Uwacheue, that the group stands solidly behind the President's ambition.

In his reasoning, no sane Igbo man will query the wisdom in the resolve to back the President, who is from the South South that was part of the war-ravaged and marginalized South East region.

'It is only a foolish Igbo man that will question the rationale for Igbos' support for President Jonathan. Providence has made it that Jonathan will be president in 2011.

'Reason being that Igbo by virtue of having been schemed out of the events and politics of this country by the northern and western groups since the civil war, have decided to support the South-South which was part of the South-Eastern region and to give Ndi-Igbo the opportunity to re-surface.

'It is only an idiot who did not understand the politics of Nigeria and the rational of imposing Twenty Pounds on the Igbo when the war ended regardless of what amount we had. It was meant to ensure that the Igbo man does not re-surface within the scheme of governance thereby making them to play second fiddle'.

Chief Achuzie advised those kicking against Jonathan presidency to have a re-think because the President's victory in the forthcoming elections will happen in our lifetime. His becoming elected President will be a panacea to the pains of the civil war'.

Stressing that he had nothing against the North, Chief Achuzie who recalled that he strongly campaigned for former President Shehu Shagari, and 'even slept in the same room with him', wondered why a South- Easterner cannot be President.

'That is the only way Nigeria can become the one Nigeria we are asking for.

The former Ohaneze scribe was however sure that an Igbo no matter his initial individual interests would eventually side with the majority once a collective decision was taken.

'Don't take what you hear from Guy Ikoku, Obiora and the others over Chief Uwechue's published statement. What Uwechue said is the stand of Igbo people notwithstanding the so-called denunciation.

'We all have been longing for the day somebody from the old South Eastern region will take over the reins of government and the time has come'.

Chief Achuzie rated President Jonathan as the best of the present Presidential aspirants on PDP platform and dared the party to play funny with its primaries.

'The PDP knows that the best candidate it has got is the incumbent President. The PDP cannot afford to play the ostrich, burying its head in the sand.

'If the party tries to play politics with it, for sure, it stands to lose. Any candidate other than the incumbent President, PDP will lose.

'If we are to talk about track records, the other aspirants are like old wine trying to recycle. We can't afford that luxury.

'The North is screaming about lack of development. If the time they produced the leaders, they were not developed, is it now that development will become their concern? They should give Jonathan the opportunity to change the fortune of this country.

'We need a change and that change will only come from somebody who didn't participate in the civil war, to pull together, all the veterans from the two divides of the civil war so that we can now bring together the experiences gathered from that war to build the nation.

'Security is not an exportable commodity. It does not matter how many people you send abroad, they will come back learning nothing.

'We should now package the security experience that enabled the South East to withstand the might of the rest of Nigeria for the 30 months of the civil war. If we merge all the experiences gathered from security and warfare from the erstwhile Eastern region, with that of the North and the West, Nigeria will be a formidable country and not a country of bloated moneybag who don't want the country to move forward.'