DANIEL NOT OUR CHAIRMAN â€“ OSHIOMHOLE 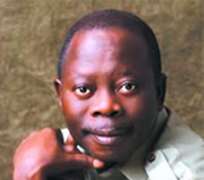 Governor Adams Oshiomhole of Edo State has debunked media reports that the Ogun State Governor, Otunba Gbenga Daniel, has been elected as new chairman of the Nigeria Governors Forum. Oshiomhole said the claim by Governor Gabriel Suswan of Benue State in the report that the decision, electing Daniel was unanimous was distasteful and completely embarrassing.

The Edo State governor, who spoke to journalists at Government House in Benin City, said some PDP governors, not more than 16 or 17, met at Governor Daniel's lodge, and that 'it is in that forum they are now claiming that they elected him (Daniel) as chairman.' According to Oshiomhole, 'I read a news item about a report to the effect that Governor Gbenga Daniel has been elected as chairman of the Governor's Forum. In the report, Governor Suswan claimed that the decision was unanimous. The truth of the matter is that I received an invitation from the outgoing chairman of the governor's forum, Bukola Saraki, which he summoned a meeting of the Governors Forum for this coming Wednesday at 8pm, among other things, to elect a new chairman and discuss other issues.'

'So, when I watched that news item that Gbenga Daniel was said to have been elected, I was confused and I can confirm that as a matter of fact, there was no meeting of the Governor's Forum. The Governors' Forum is scheduled to meet on Wednesday. But, however, some PDP governors, not more than 16 or 17 of them, met at a venue that was never a venue of our meeting, at Governor Gbenga Daniel's lodge, and it is in that forum they are now claiming that they elected him as chairman.'

Oshiomhole added that he had no quarrel with Governor Gbenga Daniel or any governor who wished to be chairman of the forum but that he expected that anyone who nursed such ambition should be able to persuade some other governors to accept him or her as chairman.

According to him, 'I thought this is serious because if a club of just 36 persons, you can call it elite club, if we cannot freely, transparently choose a chairman for the forum, then how can we be talking about free and fair election in 2011? Governors who believe in free and fair election cannot attempt to rig in some one as chairman. I found that completely distasteful and quite embarrassing.'

'If Governors will seek to outsmart and manipulate a process that is simple and straight forward, how can we expect that as leaders we are all committed to genuine electoral reform? So, I called you just to tell you that that statement credited to Governor Suswan is not correct. The Governors Forum is yet to meet, I believe it will meet on Wednesday and whoever wishes to contest should declare his intention and appeal to his colleagues for support.'