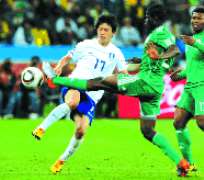 Super Eagles at the last World Cup
The next coach of the Super Eagles must not only be experienced enough to raise a formidable team that Nigerians would be proud of, but also would be capable of re-branding Nigerian football right from the domestic league.

Head of the Technical Committee of the newly elected board of the Nigeria Football Association (NFA), Barr Chris Green, who stated this recently in a chat with Saturday Sunsports , said the era of appointing mediocre coaches to tinker the national team had become a thing of the past, stressing that the next Super Eagles' gaffer, who he said would be given a long term contract, must be prepared to restore the pattern of football Nigeria was noted for.

'We need to be convinced that anytime Nigeria is taking on any team, we can be sure of winning the match. That's why we have started the process of rebuilding. With God on our side and Nigerians being patient, we hope to raise a formidable team in no distant future,' Barr Green went on.

'We're trying to get a substantive coach for the Super Eagles in no distant time. We want a cosmopolitan coach, the kind that is development-oriented, not a coach for immediate result. You must work very hard to get a good result. It takes a long process to rebuild and it requires patience. But at the same time, while we are rebuilding, we should be getting good results from competitions as well. So, we want to put the two together to make Nigerians happy.'

Alluding to the era of Dutchman, Clemence Westerhof, Barr Green hinted that the new Super Eagles' manager would be given a long term contract to enable him have enough time to build a formidable squad like the famous 1994 Super Eagles that emerged as the second most entertaining team at the US '94 FIFA World Cup and gave Nigeria her best ranking by the world football governing body when it was rated the fifth best team in the world.

'We want a well experienced coach we intend to give a long term contract. You will agree with me that Clemence Westerhof remains the longest serving coach of the Super Eagles. He had enough time to prepare the team and at a point, he left no one in doubt with the results he started posting. So, that is exactly the kind of thing we want to do.

According to the Rivers State Football Association boss, the rebuilding process would begin from the domestic league, which he said represents the hub of the nation's football development.

'The first step we intend to take is to restructure the Nigerian Premier League. We're trying to settle all outstanding matters in the Premier League to put the league as the engine of our rebuilding process. The Premier League is supposed to be the hub of our football development, such that it is only when we have properly restructured it that we can be said to be on course towards rebuilding the Super Eagles,' he explained.

'Very soon we shall come out with far-reaching decisions on how to reshape the Premier League. In no distant time, we shall lift the suspension on the commencement of the league to allow credible sponsors to come in.

Although Austin Eguavoen is at the moment in charge of the Super Eagles under caretaker arrangement, the duo of Samson Siasia and Stephen Keshi have been variously linked to the plum job lately. Green, however, said that the search for the Super Eagles' coach is not limited to indigenous coaches.

'We are not limiting our search for a substantive coach for the Super Eagles to the domestic scene. Nigerians deserve the best. Other teams from other countries used to be afraid of the Super Eagles. We don't need any mediocre to come and coach the Super Eagles for the sake of making money. We don't want a coach that would come, assemble a team, play a competition and leave without caring about the development of the game in the country,' he reasoned.

'We want the best coach. We're also listening to Nigerians and if they are clamouring for a particular coach and we give them the coach, they should also be prepared to accept the blame if he fails to deliver at the end of the day. I think we should be allowed to do what is best for Nigeria.

'We know that Super Eagles is dear to Nigerians, so there should be no half measures,' the NFA top shot averred.