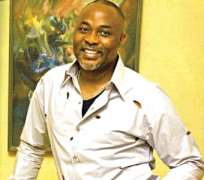 Richard Mofe-Damijo is the epitome of cool. Enduringly charming, he welcomed me into his office with that trademark smile that has melted many hearts. Despite his foray into the murky waters of politics, RMD has not allowed his cool factor to slip. Remarkably honest and always happy to discuss movies, literature, theatre, and you guessed right, politics;

RMD is one celebrity who is not afraid to articulate his position on any issue.

What I love about RMD, is the fact that he is a complete antithesis to what you might imagine.

How easy has it been making the transition from the creative industry into politics?

Well, it hasn't been a walk in the park, I must confess. But like every new venture I get into, its a challenge. I guess the circumstances around which I joined politics also made it imperative for me to be at my best. My mentor is the Governor and if you get an opportunity like that, there is a tendency for you to want to burn the midnight candle and surpass your mentor's expectations of you. I have not let down the guy who has reposed so much confidence in me. This has helped because I went in blazing with all cylinders pumping.

I was enthusiastic and that helped me to overcome whatever transitional crisis I might have experienced. Now, the downside is that the waiting time is a bit longer for politics to translate from paper into reality because of issues associated with budgeting, bureaucracy and all that. For me that is the biggest challenge. It's a compulsory waiting time.

Lawyer, theatre artist, consummate actor; would it be right to describe you now as a politician?

Well, in a sense. I don't like to reject the tag of being called a politician. It's just that the word politician conjures images of a fraudulent person, somebody who lies from both sides of his mouth. I want to believe that I represent the new breed of politicians who are making the transition from being technocrats to become politicians. Now, the kind of politician that I am is the type that wants to see efficient service delivery.

I believe that is what is gradually becoming obtainable today as good governance in different parts of the country, from Lagos, to Delta to Rivers State; and all that is as a result of young men who want to redefine the meaning of the word politician. So, if you call Fashola or Uduaghan a politician, they will not object to being called that, but their good works will speak for them. So, if you call me a politician, yes, I am a politician because I'm trying to learn the ropes, making sure that the people come first.

It has been worth every second of my time because I think I have touched quite a bit of lives that I can see directly.
Coming from a very successful background in terms of what you've achieved in the arts and your star status, are you treated differently compared to other people in government?

Well, from the point of view of my Governor, I don't think so …

And being a star does not affect…

I think that whatever it is that you are becomes less significant when you're seating in the exalted chambers and making policy decisions for over four million people. Perhaps where the preferential treatment would come are in areas that touch on my expertise of culture and tourism, because I run that portfolio. Naturally, everybody would defer to me. But in terms of being treated differently, I don't think so.

With the restiveness of the Niger Delta, what difference have you made in Delta state to attract investors and tourists to Delta state considering the rich cultural heritage of the state?

One of the most ambitious tourism project in Africa is about to berth in Delta state. It is a water theme park; there are about five of it in the world, and the sixth one is about to berth in the Warri area, in Udu local government area actually, which happens to be my local government as well. That and a wild life park which is being built in the Asaba area, the Uzo_Ugwashuku area of Delta state, which we call the Asaba Hilltop game reserve and they have a big file of animals.

So, once that project takes off, that would be perhaps my biggest contribution to the tourism industry. Apart from that, having to create a buzz in the industry, a lot more movies are being shot in Asaba, whether it is something I do or not, it is under my watch. Naturally, the credit goes to me and the Governor has created a wonderful picturesque little town.

He has converted Asaba from a very sleepy town to a bubbly town that is very hospitable and cinema friendly, either during the day or at night. I started a programme called Delta Time Quest which is aimed at young people. Somebody described the creative art as the core of youth attraction, modern media and all of that, today's youth want to embrace creativity or the performing arts. So what we have done is to do a hybrid of American Idols but extend it to comedy, dance, music, and acting. We've done two….music and comedy, we are about to do acting. All of this, for me, is not so much as to take away the guy who is an agitating youth (I don't like to use the word militant) in the creek, but to stop others from going in there, to creatively engage those who might find themselves idle.

Do you miss acting?

I do, especially when I sit down and watch a production. One of my desires is to start an elite theatre group in Asaba. Time and funds haven't given me the liberty to do that. But what I derive joy from now is making sure that people are behind the camera and wanting to get a new pool of actors and actresses and all of that. I just did a 26-episode soap opera called Inner City which was completely shot in Warri.

I've been looking forward to it been exposed so that people can see a slice of life in the inner city of Warri. I'm very passionate about Warri and so I try to tell the story of the place that gave me a life. There are more things to come from that area. I'm going be telling a lot of slum stories.

So are you going to combine politics and theatre?

Yes. That is never going to go and I'm happy that I'm in the cultural and tourism ministry so that brings me back. And at every opportunity I have, I try to make sure that I stay within the theatre. I'm like a volunteer teacher at FABA. FABA is the Film and Broadcast Academy in Ozoro run by the Ejiro brothers. I've done my first lecture there, so I intend to do that.

I also hear about Emem's Royal Arts Academy and see how I can come in there and do a summer thing with them, teach some people and just pass on the knowledge of what I have. So it gives me a chance to get in touch with my first love.

Films like the Figurine and Ije have been taken to the cinemas in Nigeria and festivals around the world. Do you really think there has been an improvement in the quality of films churned out?

Unfortunately, I don't think there is a remarkable improvement in movies. But, there is hope and the hope is those little sparks that you just mentioned. Ije and Figurine. I just saw Memories of my Heart by Ini Edo and you know how you get to a place and you say, I would do 20 or 30 minutes out of respect; but I sat through the entire movie and I enjoyed it myself.

It was such a delight to just be able to sit back and watch a movie that I had no stake in and have a good laugh. And that was exactly what happened. So, those little sparks give you hope. I like the editing of Ini Edo's movie, a little bit rash in some areas but the overall look and feel of it, the stylistics of it, you can see work in progress and you just know that given more opportunity, this person can do better. It's like what is happening to musical videos, the likes of Clarence Peters go to South Africa and get some good education, come back mean, it's just completely delightful and I see those sparks multiplying in the nearest future.

What is emerging is a new market, a new flow, a new Nollywood, which like every other development takes place. It's like the rise of the independence that happened in America. It's just that we're seeing it in a different light here. If these people would not take us seriously, if they would not look at the scripts and pay some attention to details, let us break out and show them how it is done. I did that 13 years ago with Out of Bounds. It was that same outrage that we can do things a little bit better.

Who would you like to work with, who is that one actor you admire…

Without a doubt, I don't need to think about it, it's Denzel Washington, because I think his intensity on and off screen is amazing. He's an amazing guy and it translates into everything you do. If it's not him, I would love to work with Will Smith because he combines a deep intellectual background with his comedy ability and that has also made him a wonderful star, big box office draw and credible actor.

The body of his works comes with an industry that is alive and well, where the division of labour is highly planted on the ground. All of that will begin to emerge, there are people who are writers, and known for writing and hopefully we would begin to deal with those people, take their scripts and focus on creating a new Nollywood.