WE MUST MAKE KOGI OUR DREAM STATE â€“ SENATORADEYEMI 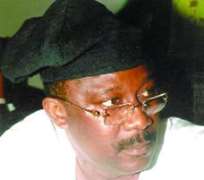 Adeyemi
Senator, representing Kogi West in the Senate,  Smart Adeyemi has called on all the stakeholders in Kogi State to join hands and work together to ensure that the state is developed and take its rightful place among other states in the country.

But to achieve this, he  admonished that  the right atmosphere must be created for all. Senator Adeyemi, who is the Chairman of Senate Committee on Federal Character and Inter-Governmental Affairs, made this call in his office while being presented with an award of excellence by a coalition of non-governmental organization in Kogi State during the week.

He said the present situation of things in the state should be a source of concern to all who love the state. According to him, the state is far behind those that were created together with it about seventeen years ago in terms of infrastructural development,  particularly the state capital, Lokoja. 'This is despite the fact that the state has all the potentials for development,'' he noted .

He said these potentials must be exploited and be tapped for the state to develop.

'When I criticize, I do it for the love and passion I have for the state. It is sad and unfortunate that we have found ourselves in this present situation in Kogi State, where all the potentials needed for development are available but are not harnessed yet. In terms of federal allocation, Kogi State receives higher allocation than Kwara State but go to Kwara State and see what they are doing there with what they receive.

Go and see what the Zimbabwean farmers are doing there. We have an abundant of water in Kogi but we can not utilize it for agricultural purposes. They said I'm fighting the state. Corruption and corrupt practices have killed the state and yet nobody is talking. Some individuals have killed the state by milking it dry. That is why it cannot develop. 'My position on the situation of things in Kogi State is borne out of my concern and love for the state. I don't have anything personal against anybody. What I'm after is good governance. By my background and orientation, I hate oppression and discrimination. So people who indulge in these vices cannot be my friend and I cannot pretend about it. So, we have to work collectively to liberate Kogi from those who are holding us hostage. Poverty and diseases do not have tribe.

Whether you are Okun, Igala, Ebira, Bassa-Nge, we all suffer these vices in Kogi State, so we must join hands together to ensure we have credible people to run the state in the next dispensation', Senator Adeyemi said. While presenting the award, the National Cordinator of the association, Comrade Alfa Ameh Ebune said the association was proud of the activities of Senator Adeyemi, particularly his concern for the poor, the vulnerable, youths and women while his contributions to debates in the floor of the Senate have made them to be proud of him.

'The youths of Kogi State have every reason to celebrate you and your achievements over the last few years in the Senate. Your activities have made us see legislative work the way we have never seeing it before. You are indeed a pride to us in Kogi State', Ebune said, adding that 'the campaign by our organization is an attempt to cleanse governance at all levels, say no to corruption, bad leadership, failure in government projection execution, and abuse of office by our political appointees'.

The Senator thanked the association for recognizing his modest contribution towards the development of his senatorial zone and Kogi State in general. Among the members on the entourage were Bashir Umar, National Secretary of the association; Hajia Habibat Onukpu, Kogi State Chairperson of National Association of Women Journalists (NAWOJ); Abdullahi Hussein and Audu Atab.